Anthony Wynne's Murder of a Lady 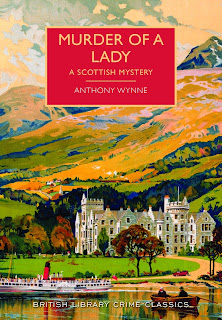 Robert McNair Wilson (1882-1963) was a Scottish doctor who wrote numerous detective novels under the pseudonym Anthony Wynne. Murder of a Lady (AKA The Silver Scale Mystery) was published in 1931.

We start with the murder of Mary Gregor, an elderly lady and the sister of the laird of Duchlan. We are told that Mary Gregor was a saint and did not have an enemy in the world, which naturally leads us to suspect that she was far from being a saint and probably had more than her fair share of enemies. And this proves to be the case.

Her murder took place in a room locked from the inside. The windows were also locked from the inside. Not only that - the grandfather of the current laird had been a keen amateur locksmith and had installed locks of his own fiendishly ingenious design throughout Castle Duchlan. None of the usual methods of defeating the locksmith’s art will have any effect on these locks.

The most puzzling clue is a fish scale. A fish scale is found at the scene of the second murder as well.

Inspector Dundas approaches the case with a good deal of confidence. Even though Dr Hailey, renowned physician and even more renowned amateur criminologist, is on the scene Dundas makes it clear that he does not want any assistance.

Dr Hailey is drawn into the case by his personal interest in two of the chief suspects. Oonagh Gregor is the laird’s daughter-in-law and her name has been linked in local gossip with that of Dr McDonald, who is the local doctor (and in fact the only doctor for miles about). Dr Hailey rescues Oonagh from drowning and he is convinced that she and Dr McDonald are innocent. He also believes that the laird’s son, Captain Eoghan Gregor, is innocent. The only two other possible suspects are the laird himself and Angus, an old and much-loved family retainer, and Dr Hailey thinks they’re innocent as well! The death-blow had such force behind it that the murderer had to be a man. 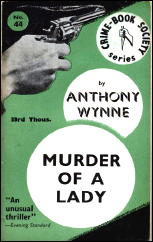 Neither Dr Hailey nor the police are able to make much headway on solving the locked-room problem and soon they will have another impossible crime puzzle to unravel as well.

The setting, the remote Loch Fyne, is used effectively and there’s extra atmosphere added by the prevalent Highland superstitions. The laird himself seems to think the swimmers may be responsible for the murders, the swimmers being ghostly fish-men who inhabit the loch and are assumed by the locals to be behind all manner of misfortunes and tragedies.

There’s a lot to admire in this book. The mechanisms behind the locked-room mysteries are genuinely clever and even more importantly the explanations are plausible.

On the other hand there are some quite ludicrous elements to the plot. And there’s a great deal of tedious and overheated romantic and emotional melodrama.

Generally speaking I think it’s a mistake for a writer of detective fiction to bother too much about characterisation but if you are going to make that mistake then you should at least try to make the characters vaguely believable. The characters in this novel are so exaggerated and the villainies so outrageous and over-the-top that the whole thing becomes silly and unconvincing.

Another problem is that Wynne seems to have such a thorough loathing for Scotland and its inhabitants that it gets a bit embarrassing.

Murder of a Lady gives us a very very good locked-room problem but overall it’s a pretty mediocre book. This one is strictly for really hardcore locked-room fans.
Posted by dfordoom at 1:50 AM