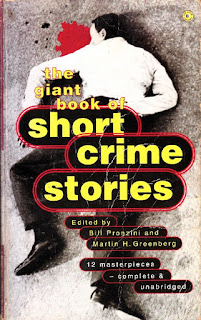 I’ve been in the mood for short stories recently, so herewith a miscellany of short crime fiction taken from the Bill Pronzini and Martin Greenberg edited anthology The Giant Book of Short Crime Stories. The twelve stories included are really novellas rather short stories. Some I’ve read before so I’ll mainly concentrate here on those that were new to me.

The twelve novellas are an odd assortment. There’s a definite bias towards the hard-boiled  style but there are a few stories that are rather surprising inclusions. I’ve written at length elsewhere about my enthusiasm for Leslie Charteris’s early Saint stories so I won’t say much about The Lawless Lady other than noting that it’s a great story although perhaps more a thriller than what would normally be considered a crime story (it's included in the collection Enter the Saint). Erle Stanley Gardner’s Death Rides a Boxcar is a spy story although it’s moderately hard-boiled. And the Mignon Eberhart story is a very surprising inclusion indeed - Eberhart was about as far removed from the hard-boiled ethos as could possibly be imagined. Nightmare is a typically twisted Cornell Woolrich tale.

Rex Stout’s 1953 novella The Zero Clue includes a fine and clever use of the dying clue trope. A mathematical wizard named Leo Heller has realised that he can use probability theory to go into business predicting things for clients. Not the usual things that probability theory would be used for, but predicting things of relevance to individuals in either their personal or business lives. Nero Wolfe has had some dealings with this mathematical wizard and he does not entirely approve him although his disapproval may be based on the fact that Heller managed to beat Wolfe to the solution of a previous case. Now Heller is convinced that one of his clients is about to commit a serious crime. He is not certain of this but considers it to be mathematically very probable.

There is indeed a crime. And a dying clue that even Nero Wolfe has trouble unravelling.

Wolfe and Archie Goodwin are in fine form, Wolfe drinks lots of beer, there’s a scene in the orchid room and Wolfe as usual gets the better of the NYPD Homicide cops. So there are all the regular ingredients of a fine Nero Wolfe story with the added bonus of a mathematical puzzle and that clever dying clue. I happen to be inordinately fond of the Nero Wolfe stories and I found this one to be pretty satisfying.

Archer stumbles into a case involving an old army buddy who has become an impecunious  painter in a sort of artists’ colony in California. There’s a murder and a valuable Old Master  painting gets stolen plus there’s a complicated romantic entanglement. Chandler was often accused (not always entirely justly) of being less than sure-footed in his plotting. Chandler however was never as incoherent as this. There are several strands to Macdonald’s plot and for the life of me I can’t figure out how they are supposed to be connected. It also lacks Chandler’s gift for sparkling dialogue. I have to admit up front that I have some reservations about the hard-boiled style although to be honest The Bearded Lady is at best medium-boiled. This is my first encounter with Macdonald’s writing so I don’t want to be too dismissive - I have no idea if this story is considered to be one of his better efforts or not.

Death’s Eye View is a 1953 story by John D. MacDonald. An explosion at sea, a rich old man who values power over all else, a dynastic struggle and a man caught up in a drama that is really none of his business - these are the ingredients for an intriguing tale although there’s no mystery here and not really a great deal of suspense. Not a bad story and certainly well-written but it doesn’t quite convince us the protagonist is in mortal danger.

Mignon Eberhart (1899-1996) was a representative of the Had I But Known school of detective fiction. Thankfully the short story format gives her less scope than usual for indulging in this sort of thing. Eberhart was also very much a believer in adding lots of love and romance to the detective story genre. One of her series detectives was Susan Dare, yet another fictional detective who writes detective stories. Her 1934 story Introducing Susan Dare has her heroine plunged into a world of romantic intrigues and murder in an isolated house in the Carolinas. While Susan dare manages to solve the case she does so mostly by accident although at least she has to be given credit for being observant. The vital clue is clever enough but this cannot reasonably be called a fair-play mystery since that clue depends on specialised knowledge that the reader is unlikely to have.

Eberhart was immensely popular in her day and her literary career spanned nearly sixty years. She wrote a type of detective fiction that is definitely not to my taste. Those who enjoy the Had I But Known school with added romance may get more enjoyment from her work. Her heroines also had a habit of getting themselves into dangerous situations, usually for no good reason.

Ed McBain’s Storm represents my introduction to the world of the homicide cops of the 87th Precinct. McBain wrote countless novels and stories featuring various detectives from   the 87th Precinct of the police force in a fictional city clearly based closely on New York City.

In this story one of these cops, Cotton Hawes, is spending his vacation in a skiing resort, accompanied by an actress friend with whom he is hoping to become better acquainted. What he doesn’t expect is to find himself in the middle of a double murder. Hawes decides to help out the local police in their investigation even though the Sheriff has made it plain that he doesn’t want any help from a big city cop. This is a pretty decent police procedural and the fact that Hawes is acting unofficially makes it a bit more interesting. The murders are brutal and difficult to explain but the key to the case is Hawes’ use of his powers of observation.

Hugh Pentecost’s The Murder Machine appeared in 1950. It’s one of several stories he wrote featuring New York detective Lieutenant Pascal. Pascal is also on vacation, visiting his Uncle Ben who is the sheriff of a mining town. Pascal has been expounding his views on crime including his belief that the police should do more to prevent crime rather than reacting after the event. Pascal however may not be able to prevent the crime that is about  to rock the town. This is an impossible crime story. Accidents can happen in a mining operation but some accidents are simply not possible and that’s the case here. The apparent cause of the accident could not have caused it. There’s a good scientific puzzle plot here with an unexpected hard-boiled twist. A good story by a writer I’d never even heard of.

Erle Stanley Gardner’s 1944 story Death Rides a Boxcar is an espionage story involving freight cars, a disappearing body, a purse containing a very large sum of money, a series of railroad switching instructions, two girls who may or may not be innocent bystanders and a nefarious plot by enemy agents to sabotage the war effort. The railroading stuff is quite fascinating. For Gardner this is something of a return to the pulpy hard-boiled style of his early work for Black Mask and there’s plenty of action. It’s understandable that in 1944 Gardner wanted to try his hand at a patriotic story about evil enemy spies and it at least has some originality. And it’s entertaining (but then Gardner alway is entertaining).

An odd but interesting assortment of stories in this anthology. Recommended.