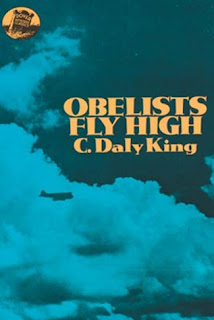 C. Daly King (1895-1963) was one of the odder American writers of detective fiction during the Golden Age. He wrote six detective novels and a collection of short stories before abandoning the genre (and fiction writing) in 1940. Obelists Fly High, published in 1935,  was the third of his novels and apart from his short story collection The Curious Mr Tarrant it is the only one of his books that is reasonably easy to get hold. In fact most of his books are pretty much completely unobtainable.

King was a professional psychologist. This might lead you to expect his detective novels to be pioneering efforts in the “psychological crime novel” genre. While psychology plays a crucial role in his stories they in fact bear no resemblance whatsoever to what we usually think of as the psychological crime novel. They are intricately plotted and extremely bold examples of the puzzle-plot mystery and they are further proof of just how varied and daring the puzzle-plot detective story was in its heyday.

Whether Obelists Fly High is a successful detective story is another matter. In my view it’s not really a success but it’s so eccentric and so interesting that despite its egregious flaws it still has to be considered a must-read for anyone with a serious interesting in the detective fiction of the interwar years.

King’s main series detective was Captain Michael Lord of the New York Police Department. Lord is extremely young (twenty-eight) to hold such an exalted rank and he owes his position to family connections. It certainly helps when your dad is the Police Commissioner’s best buddy. We’re told that while his initial advancement was due to this fortunate circumstance his continuing rise has been due to his brilliance as an investigator.  By the time you get to the end of the book this claim will cause you considerable amusement since Michael Lord is perhaps the most spectacularly incompetent of all fictional detectives. Whether King was intending to be humorous is difficult to say - he’s such a bizarre writer it’s often almost impossible to know how seriously to take anything he writes.

Distinguished surgeon Dr Amos Cutter has received a death threat and it’s a threat that both the surgeon and the Police Commissioner are inclined to take very seriously. In fact they take the threat all the more seriously since Dr Cutter is about to fly to Reno to perform emergency surgery on his brother, who just happens to be the US Secretary of State. Dr Cutter is one of only two living surgeons capable of performing the operation and the other is currently in Europe. The possibility has to be considered that a foreign government might be behind the threat to Dr Cutter’s life. The most likely suspects are the most deadly enemies of the United States. No, not the Soviet Union or Germany of Japan - it’s those dastardly French!

Captain Michael Lord is assigned to act as bodyguard to Dr Cutter on the flight. The threat was quite explicit in stating that Dr Cutter would die at noon on April 13 and since he will be airborne at that time it seems reasonable to assume that any attempt on his life will take place on board the aircraft.

During the 30s a number of crime writers were attracted by the idea of using an aircraft as a modern variant on the time-honoured device of confining a group of suspects (one of whom must be the murderer) in an isolated house. The difficulty is that scheduled airline flights in 1935 were very short. King solves this problem by forcing his group of suspects to remain on the aircraft for multiple flights.

The plot is a variation on the impossible crime idea but with some genuinely new twists. King plays some very elaborate narrative games with the reader (another example of just how innovative and even avant-garde detective fiction was in the 30s). Some of these narrative games were clearly influenced by the work of a number of other notable mystery writers but I’d be risking spoilers if I even hinted at the nature of these games or the identity of the other writers who presumably influenced the author.

Michael Lord has a collaborator in his crime-solving efforts, Professor L. Rees Pons. Given that Pons is a psychologist and King was a psychologist himself it’s probably reasonable to assume that Pons is being used as a mouthpiece for some of King’s own psychological theories. And what bizarre and off-the-wall theories they are, even by the standards of theories of psychology. There’s an immense amount of amazingly silly psychobabble in this novel. That should be a serious flaw but the ideas are so preposterous and unhinged that they add enormously to the book’s entertainment value.

It’s also probably fair to assume that Pons and his disciple Lords are being used to air some of King’s views on other social and political issues. The hostility to Christianity is as vicious as it is crude and clumsy. But then, having disposed of Christianity as a mass of blind prejudices and foolish superstitions King switches his attack to science - and it turns out that science is also nothing more than a mass of blind prejudices and foolish superstitions! Yet a third system of belief is next on the agenda - one of the suspects is a follower of the esoteric theories of Fortean science. You won’t be overly surprised to discover that Fortean theories are also dismissed with withering contempt. In fact it appears that the belief systems of absolutely everybody, apart from C. Daly King’s psychological theories of course, are a mass of blind prejudices and foolish superstitions.

While the psychological claptrap of Pons plays a crucial part in Lord’s investigation it’s combined with an obsessive emphasis on precise timings and minute-by-minute alibis that even Freeman Wills Crofts might consider to be slightly excessive. That’s what makes this book so weirdly fascinating - one moment Lord is painstakingly trying to break down an unbreakable alibi and the next he’s off on some strange flight of psychological fancy making wild intuitive leaps.

Lord is not merely the most staggeringly stupid fictional detective in history. He’s also breathtakingly reckless, irresponsible and completely unethical.

You might be wondering at this point what an obelist is. I have no idea. The word is never even mentioned in the book. I assume that obelists are the suspects, or maybe they're the investigators.

As someone who loves floor plans in vintage crime novels I was pleased that the novel includes a plan of the interior of the Boeing 247 airliner (plus a couple of incredibly detailed alibi charts).

Obelists Fly High is a bit of a trainwreck but it’s such an odd and intriguing trainwreck that it’s worth a read if only for its curiosity value.
Posted by dfordoom at 5:19 PM