Guy Boothby's A Prince of Swindlers 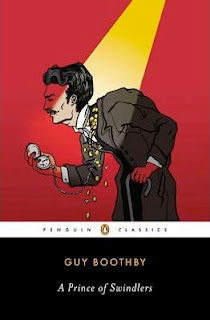 Guy Boothby (1867-1905) was an Australian writer who enjoyed international success during his brief career. He created one of the first fictional diabolical criminal masterminds in the person of Dr Nikola, he wrote one of the earliest horror novels featuring an Egyptian mummy. And he invented a new genre, the tale of the gentleman-thief. The first of his Simon Carne stories appeared in 1897, a year before the first Raffles story of E. W. Hornung saw the light of day. The six Simon Carne stories stories were published in book form in 1900 as A Prince of Swindlers.

A Prince of Swindlers includes a brief framing story. An English nobleman, the Earl of Amberley, encounters a charming and rather scholarly Englishman named Simon Carne living on an island in the middle of a lake in India. Amberley offers to introduce Carne to London society. It is an offer that Carne intends to accept and it is an offer that Amberley will have cause to regret. Simon Carne is a thief and a swindler, on the grand scale.

Simon Carne does bear some resemblance to Raffles. For all his villainy he does have a moral code of his own. He will not steal anything from Amberley. Like Raffles he steals only from those who are well able to afford the loss. And in the story A Case of Philanthropy what sets out to be Carne’s blackest crime has a surprising twist that reveals that Carne’s moral code is genuine enough if rather unconventional.

While Raffles and Simon Carne are anti-heroes with at least some redeeming qualities they are still anti-heros. They are still thieves. In the case of Raffles we get a sense of the temptations that led him to adopt a life of crime. Raffles is the more interesting of the two characters because of his very ambiguous social position. Having said that, Simon Carne is still an intriguing character.

Carne is charming, witty, learned and soon becomes the toast of fashionable society. He appears to be the most fortunate of men, apart from one distressing circumstance - he is a hunchback. Appearances can however be deceptive.

Carne also has an alter-ego. He has rented a large and luxurious London home. His next door neighbour is a man who is every bit as colourful as Carne himself and although less respectable soon becomes almost as celebrated - the famous private detective Klimo. Simon Carne and Klimo are in fact the same man. Simon Carne is actually a master of disguise. Klimo is merely his most spectacular creation.

The obsession with disguise was a curious feature of the popular fiction of that era and indeed still figures in detective stories and thrillers as late as the 1930s. It was a curious obsession which modern readers would find rather unconvincing but it was one of the conventions of the genre at the time and it adds to the fun.

The Klimo alter-ego will prove useful in Carne’s first major criminal coup, the theft of the Duchess of Wiltshire’s diamonds. Carne’s plan to steal the jewels is intricate and daring and he will have to rely on his assistants to carry out the plan. His valet Belton is the most important of these assistants. Belton is

Carne’s second adventure, in which he contrives to win the Derby by less than sporting means, is less interesting.

A Service to the State is a considerable improvement. This time Carne is stealing, not from the cream of society, but from dangerous terrorists. Carne’s objective is to enrich himself at their expense but in the process he will be performing a service not only to the nation but also to an old man and his frightened daughter.

The Wedding Guest offers Simon the opportunity to pull off another daring robbery, and to make the adventure more appealing to do so in a houseful of wedding guests at the society wedding of the year. It is not enough for Simon merely to carry out successful robberies - the crimes must be as difficult as possible and must attract as much publicity as possible. He would be devastated were he to commit a crime that did not make front page news in all the newspapers. He is certainly driven by greed but there is obviously more to it than that. Perhaps it’s simply ego or perhaps there’s a deeper explanation. The stories offer a few hints but nothing definite. Perhaps it’s just as well - sometimes trying too hard to offer a definitive explanation for a character’s motivation ends up making the character less rather than more interesting.

A Case of Philanthropy presents Simon Carne with a temptation he cannot ignore. A sum of a hundred thousand pounds has been raised for the unlucky victims of an earthquake. Finding a way to divert that money to his own pocket would be both profitable and a spectacular swindle. Of course it would be bad luck for the unfortunate earthquake victims. Or would it?

The sixth and final adventure, An Imperial Finale, is intended to crown Carne’s career as the Prince of Swindlers. And surely no-one could deny that title to someone who could steal from royalty?

With Simon Carne Guy Boothby created perhaps the first anti-hero in popular fiction and A Prince of Swindlers remains a fine example of the gentleman-thief sub-genre. Highly recommended.

The first of Simon Carne's adventures, The Duchess of Wiltshire’s Diamonds, was adapted (extremely well) in the wonderful 1971 TV series The Rivals of Sherlock Holmes.
Posted by dfordoom at 1:35 AM