The Corpse in the Green Pyjamas 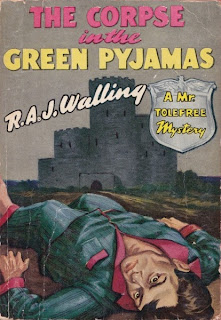 The Corpse in the Green Pyjamas is one of R. A. J. Walling’s Mr Tolefree detective novels. Published in 1935, it was in fact the fifth of the twenty-two Philip Tolefree mysteries. It was originally published in Britain as The Cat and the Corpse.

R. A. J. Walling (1869-1949) was born in Exeter and spent his life as a newspaperman, eventually becoming managing director of the Western Newspaper Company. He took up crime fiction quite late in life, being nearly sixty when his first detective novel was published. Walling wrote a number of other books including a biography of Sir John Hawkins, the great if rather notorious admiral of Elizabethan times.

Philip Tolefree is a private enquiry agent (what Americans would describe as a private detective). He is engaged by a man named Stratton but at this stage no actual crime has been committed. While Stratton is staying at Wolborough Castle, the imposing residence of Lord Meriden a rather unsavoury individual by the name of Eric Yves disappears. His exact fate will be a matter of considerable dispute.

Mr Tolefree arrives at the castle on the following day. That night he discovers a secret passageway (not altogether a surprising thing to find in a medieval castle) and in that passageway he finds Eric Yves’ body. Or does he? Both Lord Meriden and his brother, the Honourable John Meriden, are emphatic that Tolefree was mistaken. A day later Yves’ body turns up half a mile from the castle. While Tolefree remains convinced that he saw the man’s body in the castle he finds that, rather to his surprise, no-one is inclined to believe his version of events.

The Meridens have not exactly adapted to the modern world. They see no reason whatsoever why they should. They remain firmly feudal in their view of the world. This feudal outlook will pose considerable problems for Mr Tolefree.

Philip Tolefree is not one of the more colourful of fictional detectives but he isn’t irritating either. He is a man of quiet determination. The fact that nobody believes his story seems to amuse him, and he also seems amused by the feudal pretensions of the Meridens. It’s the somewhat absurd but rather ingenious scheming of the Honourable John Meriden that provides much of the entertainment. He doesn’t really care who killed Eric Yves as long as it doesn’t disturb the grand isolation of Wolborough Castle.

Walling’s style is pleasant with a certain amount of humour. His plotting is precisely what you expect from a successful writer from the golden age of detective fiction.

The Corpse in the Green Pyjamas is thoroughly entertaining and should be highly satisfying to fans of classic English murder mysteries. Recommended.
Posted by dfordoom at 10:20 AM