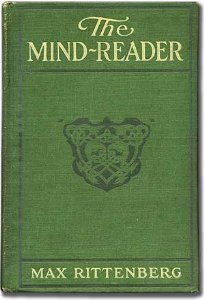 Max Rittenberg’s The Mind-Reader is yet another entry in the psychic detective sub-genre, and it emphasises once again just how surprisingly varied this rather small sub-genre is.

This 1913 short story collection recounts some of the cases of Dr Xavier Wycherley. Dr Wycherley is a mind doctor. He does not consider himself to be a detective and in fact he dislikes having on occasion to act as one. Nonetheless many of his cases do involve crime and there are times when, for the sake of a patient, Dr Wycherley has to act in that capacity.

Dr Wycherley’s methods involve both hypnosis and psycho-analysis, two subjects that the late Victorians and the Edwardians found both deeply fascinating and somewhat horrifying. Dr Wycherley also takes advantage of certain gifts that would today be considered to be within the realm of the paranormal. At that time we must remember that science had not yet drawn a firm line between strange phenomena that were real and strange phenomena that turned out to have no scientific basis whatsoever (such as psycho-analysis). Dr Wycherley considers himself to be a man of science.

Dr Wycherley’s cases take him into various worlds - the world of high politics, the world of espionage, and even the world of faith healing. His patients may be peasants or princes. Wycherley is a kindly man who is fortunate to be sufficiently wealthy (he lives on a private island in a lake) that he does not have to concern himself with the sordid matter of fees.

Wycherley’s main objective is always to heal the minds of his patients. The solving of a crime may be a necessary pre-condition for such a cure but it is not a strong motivating factor for the doctor. Nevertheless he does like to see justice and good prevail.

One case, set in the glamorous environs of Monte Carlo, involves the selling of French naval secrets. Another case confronts him with a crown prince haunted by a tragic secret,  another involves the private affairs of a British Cabinet Minister while yet another of these tales concerns the murder of a zoologist whose particular interest is sloths. Who knew that sloths could be so deadly?

As is so often the case with Victorian and Edwardian fiction it is essential to bear in mind that they are set in a very different world, a world in which concepts like duty still had enormous resonance. The plots simply don’t work unless you take this into account. That could be seen as a weakness in that some modern readers will find this very alienating, but to me it’s one of the great attractions of late 19th and early 20th century fiction - I like my reading to allow me to escape into a completely different world.

Coachwhip Press has released this book as part of their 2 Detectives series, paired with another collection of psychic detective stories, Gelett Burgess’s Astro, the Master of Mysteries.

Anyone who has a taste for the occult or psychic detective sub-genre, and anyone who enjoys crime fiction that is focused on psychology, should certainly consider checking out The Mind-Reader. Highly recommended.
Posted by dfordoom at 9:01 PM