Sir John Hawkwood: A Tale of the White Company in Italy 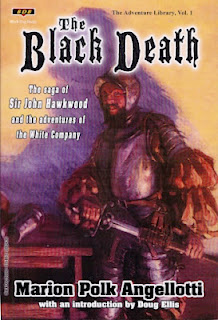 Sir John Hawkwood and his famous White Company have inspired quite a few writers, including most famously Sir Arthur Conan Doyle. But so packed with action was Hawkwood’s life that even a team of writers working non-stop would scarcely suffice to chronicle all his adventures.

The real Sir John Hawkwood was the son of a tanner who dreamed of becoming a soldier. He achieved his objective, running off to join the English army fighting in France during the Hundred Year War. He was born to be a soldier and was knighted for bravery by the Black Prince after the epic battle of Poitiers (or so the story goes). With the coming of peace (not destined to be a permanent peace since the war would flare up again early in the following century) Hawkwood, along with many others, drifted into the life of a freebooter. He led a famous company of mercenaries known as the White Company and sold his services to the highest bidder.

Italy proved to be ideal for Hawkwood’s purposes with so many independent principalities and city-states and endless wars. The Italian mini-states made much use of mercenaries (or condottieri as they were known), a practice that could prove dangerous. Hawkwood soon gained a reputation as the most skillful and clever of all these soldiers of fortune. The condottieri were as famed for their treachery and their fondness for pillaging as for their military prowess but the White Company was, by condottieri standards, relatively well-disciplined. And while Hawkwood could be treacherous he was perhaps less treacherous than most (which isn’t saying much).

Hawkwood fought for many different employers, changing sides regularly. He ended his career as Captain-General of Florence.

Marion Polk Angellotti in her 1911 novel Sir John Hawkwood: A Tale of the White Company in Italy, presents us with a somewhat idealised portrait of the man. It’s based very loosely on an actual episode in his career but the author is more concerned with telling an entertaining story than with sticking to the historical facts.

As the story opens Hawkwood is in the service of Prince Antonio della Scala of Verona, a most untrustworthy and unpleasant employer. Verona is fighting a bitter war against the Duke of Padua. Hawkwood is given a task by his employer which he considers to be unworthy of a soldier - to pretend to kidnap the Princess Giulia so that dela Scala can pretend to rescue her. The prince’s hope is that the princess, who dislikes him exceedingly, will be so grateful that she will consent to marry him.

Hawkwood not only refuses the task, he hatches a plan to sabotage it. The grizzled old warrior is somewhat under the spell of the young and beautiful Giulia and he decides that for once in his life he will do something honourable, something that the Black Prince himself would have approved.

Of course everything gets more complicated for both the plotters and the counter-plotters and it seems that this quixotic adventure may yet cast Hawkwood his life. On the other hand it might make him feel like a true knight again and dicing with death is part of his trade anyway.

It’s a stirring and skillfully written tale of chivalry and knightly adventure. Angellotti’s Sir John Hawkwood might be a radically cleaned-up version of the original but he’s no plaster saint either. He’s an interesting mixture of ambition, greed, honour and courage.

The Black Dog Press edition (with the title of The Black Death) also includes a series of additional short stories written for the pulp magazine Adventure between 1911 and 1915 in which Angellotti recounts further adventures of hero, some dealing with events prior to the novel and some dealing with the later stages of his career.

There’s a fair amount of action in these tales although the author is more interested in intrigue and in her character’s personality than in giving us endless accounts of battles.

Born in 1887, Angellotti had a reasonably successful writing career in the early part of the 20th century and achieved her greatest and most lasting success with her novel Firefly of France, dedicated to the great French World War I air ace Georges Guynemer. For some reason she gave up writing in the 1920s although apparently she lived until 1979.

With its colourful and memorable hero The Black Death is definitely a worthwhile purchase for any fan of the pulps or adventure fiction in general.
Posted by dfordoom at 6:16 PM