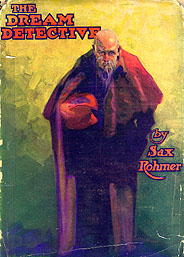 Psychic or occult detective stories enjoyed a considerable vogue towards the end of the 19th century and for the first quarter of the 20th. The best-known are William Hope Hodgson’s Carnacki the ghost finder and Algernon Blackwood’s John Silence stories. There were also the Flaxman Low stories of Hesketh V. Prichard (1876-1922) and Kate O'Brien Prichard. And there was also Sax Rohmer’s The Dream Detective.

Published in 1925, The Dream Detective recounts ten cases in the career of Moris Klaw. Klaw is pretty much what you’d expect an occult investigator to be - a rather shabby and oddly dressed old man, tall and stooped and with a bald head, and with a prodigious knowledge of the occult.

There is a fascinating difference though that sets these stories apart from the psychic detective stories of other writers. In most cases the psychic detective investigates supernatural happenings (or happenings assumed to be supernatural) using the methods of science (albeit very unconventional science of an occult nature). But Moris Klaw’s cases are essentially straightforward if unusual crimes without any overt supernatural elements, but he investigates them by methods that are most certainly occult.

Moris Klaw has come up with several singular theories of crime. The first is that very powerful emotions, such as those experienced by both a murderer and his victim, are imprinted on their surroundings where they can be recovered. Klaw does this by sleeping at the crime scene. In his sleep he receives a kind of mental photograph of the crime (hence the use of the term dream detective as the title of this collection). Klaw believes that thoughts have an almost physical existence, an idea that finds its fullest expression in the best story in the collection, The Case of the Veil of Isis.

His second theory is the Cycle of Crime. Certain objects, especially historical relics, are continually involved in a series of crimes often over the course of many centuries. To some extent this can be true of houses as well. As Moris Klaw points out in The Case of the Haunting of Grange, a haunted house is not haunted by one ghost over the course of many generations but rather by a new ghost in each generation, but the manifestations will always follow the same pattern. It’s not so much that the house is haunted by a ghost as the house itself possesses some quality that produces ghostly manifestations. In some cases this may be as a result of an atrocious crime or the career of a notorious scoundrel who lived in the house at one time.

Moris Klaw has an assistant - his beautiful and rather glamorous daughter Isis Klaw. She is the keeper of his occult library and her knowledge of such matters comes close to equalling that of her father. He often works with Inspector Grimsby of Scotland Yard. Grimsby had been a sceptic but after the affair in the Menzies Museum he is convinced that Moris Klaw is not merely genuine - he recognises that in any crime that has odd or unusual elements to it Klaw’s help is absolutely essential to him. Grimsby is young, talented and ambitious but most importantly he has a knack for working with other people.

Many of the cases involve archaeological artifacts and several are set in museums or involve collectors of artistic or archaeological objects. The Tragedies in the Greek Room are caused by the famous Athenean Harp, the most valuable item in the Menzies Museum. The Case of the Headless Mummies revolves around both mummies and the legendary Egyptian Book of the Lamps. The Case of the Potsherd of Anubis (one the best stories here) is about an ancient vase which is believed to have the power to summon great powers, an object sought by at least three different parties all with their own motives.

In The Case of the Blue Rajah the object is a fabulous diamond with a notorious history. In The Case of the Ivory Statue (another of the standout stories) it’s a modern work of art, but it is a statue of an ancient Egyptian dancer.

Sax Rohmer is best remembered for his Fu Manchu novels but he wrote in various genres, always entertainingly. The Dream Detective is a superb combination of crime and the occult, thoroughly enjoyable and original and is highly recommended.
Posted by dfordoom at 7:06 PM