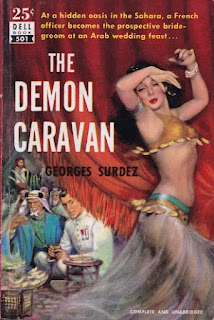 Mention French Foreign Legion adventure stories and most people will think of P. C. Wren but in fact the grand master of that particular genre was Georges Surdez (1889-1949). Surdez was born in Switzerland but emigrated to the United States as a young man. Demon Caravan, published in 1927, is one of his best known Foreign Legion novels.

What makes it particularly interesting to me is that it is also a species of lost world novel, a genre for which I have a great fondness.

A French camel patrol in the Sahara gets shot up in the foothills of the Iron Mountains and the officer in command, Lieutenant Brangin,is wounded. This is all a bit strange since these mountains were assumed to be uninhabited although there have been some strange stories circulating among the local Arabs suggesting that the mountains are inhabited by demons.

The lieutenant tells his story and the new commander of the camel patrol, Captain Lartal, is intrigued by it. When he is ordered out of the fort to pursue a raiding party he contrives to find himself in the spot where Lieutenant Brangin’s party was ambushed. The patrol camps for the night but during the night his old comrade-in-arms Corporal Tlemsani informs him they are being watched, and watched from close quarters. Lartal and Tlemsani creep out of the camp and capture two intruders. The one Lartal captures is something of a surprise - she is a beautiful young woman. Presumably the same woman that Lieutenant Brangin had mentioned as being apparently the daughter of the sheikh of these mysterious mountain people.

The woman and her companion, a large black man who appears to be her servant, refuse to divulge any information. While the obvious course of action would be take them back to the fort for further questioning Lartal indignantly rejects any such suggestion. It would be ungentlemanly and it could dishonour the woman. And Lartal, although he is a hardbitten soldier, is also in his own way both a gentleman and a romantic. He releases both captives. This will prove to be a fateful decision, but also a fortunate one.

On returning to the fort Lartal finds himself thinking about this young woman. He finds himself strangely restless and disturbed. His commanding officer, the rather whimsical and kindly Captain Vasil, diagnoses the problem immediately. Lartal has fallen in love.

Lartal then receives orders to leave the area to undertake a mission far to the east but before he leaves he receives a mysterious message. The message is cryptic in the extreme but oddly enough although it would appear to be from some native leader it is written in excellent French. It invites Lartal to a rendezvous and advises him it would be very much to his advantage to keep this rendezvous. It also suggests he should travel with a bare minimum of an escort. Lartal, with Vasil’s blessing, sets off accompanied by Corporal Tlemsani.

This rendezvous will lead Lartal to the discovery of the mystery of the Iron Mountains. They are very much inhabited. The interior of the mountain range is lush rich country and there is a very large community living there. In fact there’s a whole city. Lartal will discover that the young woman he captured and released, Morjana, is indeed the daughter of the chieftain but the identity of this chieftain will provide another surprise. Even more surprisingly Lartal soon finds himself betrothed to Morjana.

But all is not well among the people of the mountains. A fanatic named Omar has been stirring up trouble and this trouble is about to come to a head.

The novel is reminiscent in some ways of Kipling’s The Man Who Would Be King. There is plenty of action and adventure but that’s not the primary focus of the story. It is the personalities and the motivations of the main characters that are most important. These characters will face both opportunities and dangers and their lives will never be quite the same again.

It is also the story of a strange lost city facing a deadly threat to its survival.

Surdez was quite an accomplished writer. He wrote for the pulps as well as writing novels but he has a fairly polished style. Like Kipling he has the ability to deal with the subject of colonialism with subtlety and understanding, without relying on the prejudices of his own day but also without the equally pernicious prejudices of our day.

Demon Caravan is an exciting tale of adventure but it’s a little bit more than that. A fascinating read, and highly recommended.
Posted by dfordoom at 3:33 AM