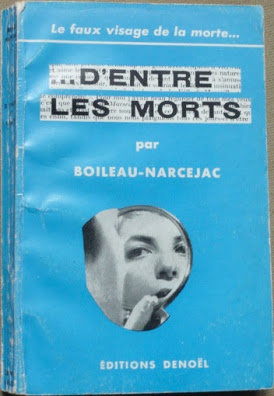 The novel was published in an English translation in 1956 under the title The Living and the Dead and Hitchcock’s film followed a couple of years later.

They also wrote the book on which Clouzot’s Les Diaboliques was based and I’ve wanted to read one of their novels for years. Sadly this one seems to be only one readily available in an English translation.

As is the case with the movie caution is needed when discussing the plot. There are major plot twists that I don’t wish to spoil so I’ll be a vague as possible about the plot.

The movie followed the storyline laid out in the novel surprisingly closely. The changes are fairly minor in themselves, but significant especially with regards to the motivations of the characters.

The story opens in 1940. Flavières had been a cop but had been forced to resign after an unfortunate incident on a rooftop. He had been chasing a suspect but suffered an attack of vertigo and lost his nerve. As a result a fellow policeman was killed. Flavières now works as a lawyer. An old acquaintance whom he hasn’t seen for years contacts him out of the blue asking for help in a delicate matter. He is worried about his wife’s odd behaviour. Could Flavières keep an eye on her?

The wife, Madeleine Gévigne, seems to be obsessed with a long-dead ancestress, the mysterious Pauline Lagerlac. Pauline had committed suicide and Madeleine’s husband fears she may do the same. Flavières soon discovers this apparently simple job isn’t so simple after all, owing to the fact that he fallen hopelessly in love with Madeleine. Something he is ill-equipped to deal with, being chronically ill-at-ease with women.

Of course if you’ve seen the movie you know that catastrophe will strike about halfway through the story.

Like the movie it’s a story of an ex-cop’s obsession with a woman, and with death and with control and identity. The major difference is in the personality of Flavières. The character he became in the movie, Scottie Ferguson, is dark and disturbing in his own way and has some serious emotional and sexual issues. But he is at least a person who believes he is a basically good and moral person. That’s responsible for much of the pathos and the irony of the film. Flavières has no such illusions about himself.

This difference in characterisation gives the endings of the novel and the movie rather different feels. In both cases the ending is bleak, but it’s not the same kind of bleakness.

The other major difference is that the war plays a major role in the novel with the first half of the story occurring in 1940 as France faces defeat and the second half taking place in 1945 against a war-ravaged and cynical background of France in the immediate aftermath of the end of the war.

There are sufficient differences in tone and characterisation that it’s possible to regard Boileau and Narcejac’s novel and Hitchcock’s movie as quite distinct works. The movie is an acknowledged masterpiece. The novel is a very fine piece of crime fiction and can be unhesitatingly recommended.
Posted by dfordoom at 3:01 AM