The Dorrington Deed-Box, by Arthur Morrison 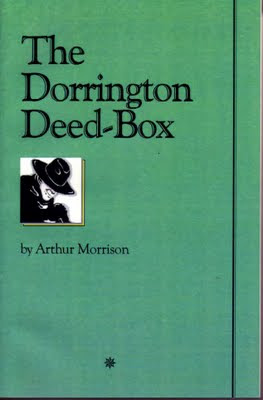 Arthur Morrison is best-known to crime fans today for the Martin Hewitt stories which were among the most successful of the stories that followed in the wake of the enormous success of Conan Doyle’s Sherlock Holmes stories.

Morrison’s method with the Martin Hewitt stories was simple. He created a detective who was the complete opposite of Sherlock Holmes. Hewitt is self-effacing, polite, even-tempered, modest and gets on well with the police. It sounds dull but Morrison was a fine writer and a skillful exponent of the art of crime fiction plotting and these stories are highly entertaining.

Less well-known but even more interesting are the half-dozen stories involving the firm of Dorrington and Hicks, private enquiry agents, collected in 1897 in The Dorrington Deed-Box. Hicks is more or less a silent partner. The prime mover in the film is the sinister and mysterious Dorrington. Dorrington is a talented investigator but he’s no gentleman amateur. He intends to make money. A lot of money. To do this by strictly legal means would require years of hard work. Dorrington has no intention of waiting, and fortunately he is entirely untroubled by pangs of conscience.

When he takes on a case he looks for an angle that will allow him to enrich himself. If this happen to be at the expense of the client Dorrington is unlikely to lose any sleep over the matter. If it results in the total ruin of the client this i a matter of no concern at all to Dorrington. If he can’t find an opening for shady dealing then he will investigate the case to the best of his ability and endeavour to produce a favourable result for his client. After all, in order to keep the business going he needs at last some satisfied customers. It is necessary to build up a reputation as a legitimate detective if he is to get the opportunities he craves for his less legitimate activities.

Dorrington gets away with all this because he is a man of immense charm. He is also an extraordinarily good liar.

Dorrington was one of the first great anti-heroes in crime fiction (and was quite possibly the first). Morrison was ahead of his time and these stories found less favour with the reading public than the Martin Hewitt stories. The factors that made them less successful at the time are of course the very factors that make them so interesting today.

The first story, The Narrative of Mr James Rigby, sets things up. An unfortunate Australian on his way to England is taken in by the charm and good fellowship of a fellowship of a fellow passenger. This fellow passenger is Dorrington and Mr James Rigby finds himself in a position where he could very easily lose both his fortune and his life. At the end of this introductory story Dorrington’s private papers are discovered and these form the basis for the other five stories.

The following four stories follow the nefarious activities of Dorrington as he becomes involved in horse racing scams, diamonds and a crooked business speculation involving one of the boom industries of the 1890s, bicycles. The final story explains the beginning’s of Dorrington’s career as both detective and criminal.

Dorrington himself is a marvellous creation, thoroughly villainous but seductively charming and with no moral scruples whatsoever. He’s a larger-than-life character and he has the fascination of pure evil.

Morrison’s plotting is first-rate and the smooth villainy of Dorrington inspires him to produce some of his wittiest and most enjoyable prose.

These stories are simply enormous fun. I can’t recommend them highly enough.
Posted by dfordoom at 6:52 AM