News from the Moon 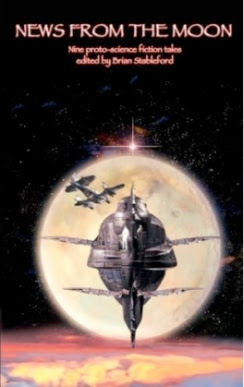 News from the Moon, edited by Brian Stableford, is a collection of nine French “proto-science fiction tales” from the 19th century. Many of these stories won’t fit most people’s ideas of what constitutes science fiction but in some ways that’s Stableford’s point - that there was a distinctive school of French speculative fiction at that time that differed in many ways from the contemporary scientific romances of British authors such as H. G. Wells and Sir Arthur Conan Doyle.

In his lively introduction Stableford traces the history of science fiction in France back to the 17th century although the earliest story included in News from the Moon dates from 1768. This is Louis-Sébastien Mercier's News from the Moon, an odd mix of speculation about life after death and life on other planets.

Adrien Roberts’ The Embalmed Hand is gothic horror with a science fictional element, a tale of an embalmed hand and poisons and a dissolute doctor.

Jean Richepin's The Metaphysical Machine is a story of madness and the search for truth, a search that takes a disturbingly extreme physical form.

Albert Robida's The Monkey King is an outrageous satirical epic. A young boy is shipwrecked on an island and raised by monkeys. He will later become a seafarer and eventually lead an army of monkeys on the conquest of Australia. Robida makes many amusing points about civilisation and savagery and imperial conquest.

Eugène Mouton’s The Historioscope is perhaps the most impressive story in the collection. A historian researching ancient trade patterns meets a very eccentric old gentleman who has invented a means of actually seeing the past, literally. The idea is cleverly developed.

Georges Eckhoud’s story Tony Wandel's Heart tells of a surgeon who masters the technique of organ transplantation. It turns out that transplanting a heart not only can restore lost youth it can also have very unexpected effects on the personality. The heart in question is transplanted into a series of different bodies and leaves each individual who receives it dramatically changed.

Stéphane Mallarme’s The Future Phenomenon, Guy de Maupassant's Martian Mankind and Fernand Noat's The Red Triangle round out the collection in their very odd fashion.

While these tales are in the main rather unconventional examples of science fiction they’re all intriguing in their own ways and as usual Stableford does a fine job as translator as well as providing a thoughtful and informative introduction. Definitely worth getting.

This would make a splendid companion edition to the Isaac Asimov-edited anthology of 19th century British and American science fiction, The Birth of Science in Fiction (also highly recommended).
Posted by dfordoom at 9:35 PM