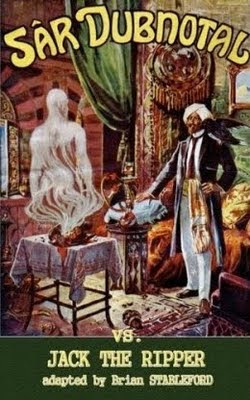 Sâr Dubnotal vs Jack the Ripper collects five of the twenty Sâr Dubnotal stories published in French pulp magazines in 1909. The stories were published anonymously and the identity of the author has never been definitively established.

Sâr Dubnotal was one of the first fictional superheroes. The stories combine gothic, supernatural, adventure and crime elements in a trashy but entertaining blend.

Sâr Dubnotal, also known as the Great Psychagogue, is a master of the art of psychognosis. He has studied occult philosophies under a noted eastern yogi and has developed his psychic abilities to a supremely high level. His powers have earned him a vast fortune and he now devotes his life to investigating crimes involving the occult and generally battling evil. He has a team of assistants and disciples and he can call on aid from a powerful yogi who has had himself buried alive but who can leave his earthly body at will.

The five stories in this volume form a connected series. A remote Breton house has been the scene of what appears to be a haunting. It’s a haunting of fairly recent origin, and the most obvious culprits are the old Comte de Trégully or his son Jean. Both died in slightly questionable circumstances. If murder was involved it would explain why the deceased spirit’s is haunting the house. But what of the current owner of the house, Jean’s widow, the Comtesse Azilis de Trégully?

Sâr Dubnotal soon becomes convinced that the evil hypnotist Tserpchikof is the prime mover in evil events that occurred in the past, and in further evil events that are even now being planned. The overheated plot will eventually embrace a vast criminal conspiracy known as the Chessmen, the mystery of the Flying Dutchman, and Jack the Ripper!

This is another publication from Black Coat Press translated by Brian Stableford. He provides his usual fascinating introduction. The Sâr Dubnotal tales are not exactly great literature and are in fact chaotic and occasionally completely incoherent in construction. They’re not exactly models of literary style either. As Stableford explains, however, they are a significant step in the development of popular fiction. They’re a very early example of the superhero genre, and they’re an interesting blend of crime and gothic fiction, of detective story an supernatural thriller.

And despite their flaws they’re fairly entertaining. Worth a look for anyone with an interest in early pulp fiction.
Posted by dfordoom at 2:49 AM