The Black Gang, by Sapper 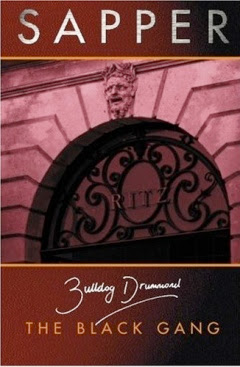 The Black Gang was the second of the Bulldog Drummond novels written by Herman Cyril McNeile under the pen-name Sapper. Little read today, their legacy the fields of both spy fiction and pulp fiction in general can hardly be over-estimated

They had a definite Boys’ Own feel to them, but the idea of a man who appears on the surface to be a harmless buffoon being in reality a brilliant crime-fighter and the scourge of various international conspiracies, and the further idea that he pursued these objectives in an unofficial capacity without the approval of the police - these ideas were to have an enormous influence on pulp fiction, comic-book, movie and TV heroes. It’s an influence that continues to this day.

Drummond was interesting in that, as formidable as he was, he relied as much on brute strength and sheer bravado as on brainpower. He was rarely as clever as the diabolical criminal masterminds and international spymasters he came up against, but his courage, his tenacity and his sheer stubbornness were enough to carry the day.

The first novel, in 1920, had seen Captain Hugh Drummond going slowly mad with boredom in peacetime England and looking for any kind of adventure. He got more than he bargained for, coming up against the nefarious Carl Petersen, a master of disguise, and the beautiful but deadly Irma. Irma claims to be his daughter. This may or may not be true. That she is Carl Petersen’s lover is more or less beyond doubt. Petersen is involved in a vast Bolshevik conspiracy although his own motives have more to do with power than political principles.

Drummond had foiled these dangerous plans, but Bolshevik agitators are still busily at work. As the second novel opens Drummond has formed his old British army pals into an unofficial vigilante force to combat communist subversion. The conspiracy he uncovers seems so ingenious that he could almost believe that Carl Petersen himself is behind it. But surely that can’t be true? Can it? Surely the world has heard the last of Petersen and his depraved daughter? And yet it has all his trademarks! The stage is set for another showdown.

The introduction to Wordsworth’s paperback omnibus collection of the four Bulldog Drummond novels dealing with the fiendish Carl Petersen makes grovelling apologies for the political incorrectness of these stories. Personally I think this is unnecessary and insulting. I’d prefer to be credited with sufficient intelligence to make my own judgements as to how I feel about McNeile’s politics.

Be that as it may, the Bulldog Drummond novels are still highly entertaining.
Posted by dfordoom at 8:39 AM