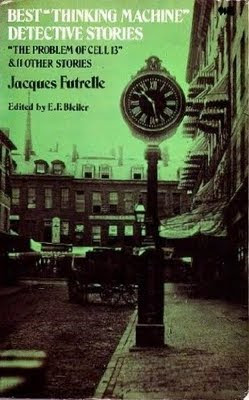 The Best Thinking Machine Detective Stories collects a dozen stories featuring Jacques Futrelle’s fictional detective, Professor Augustus S. F. X. van Dusen. As his nickname The Thinking Machine implies, van Dusen is very much in the “detective as intellectual genius” mould. The Thinking Machine leaves most of the legwork to his friend Hutchinson Hatch, a newspaper reporter. His boast is that he applies rigorous logic to the solving of crimes. This method, along with his background as a scientist, makes him a formidable enemy of the criminal classes in early 20th century America (Futrelle, despite his name, was an American).

Futrelle’s plots are ingenious, and although they occasionally strain credibility Futrelle did make a real effort to make the solutions to his crimes relatively plausible.

The collection includes The Problem of Cell 13 – one of the most famous of all detective stories, and a story that holds up remarkably well. The Scarlet Thread, The Brown Coat and The Flaming Phantom are good examples of Futrelle’s art – crimes that appear to be impossible (a word that always exasperates nickname The Thinking Machine) but turn out to have rational and believable, if highly convoluted, explanations. The Phantom Motor doesn’t work quite so well – the solution is just a little too contrived. The Problem of the Stolen Rubens and The Missing Necklace illustrate van Dusen’s method exceptionally well. The Thinking Machine solves the case by finding the only possible method whereby the thefts could have been carried out. The Lost Radium is amusing, and shows Futrelle’s fascination with science. The plot is gimmicky but entertaining.

Professor van Dusen and Hutchinson Hatch don’t have the depth of characterisation or the complexity of Holmes and Dr Watson but van Dusen is an amusing and entertaining hero. The stories were mostly written around 1905-06. Sadly, Futrelle was drowned when the Titanic went down in 1912. His stories are immensely entertaining and really deserve to be more widely read.