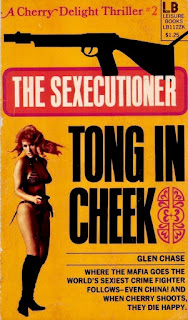 Tong in Cheek, published in 1973, is the second of Gardner Francis Fox’s Cherry Delight sexy spy thrillers which he wrote under the name Glen Chase. This series is sometimes known as the Sexecutioner series. Fox had plenty of experience in this genre having written the very entertaining The Lady From L.U.S.T. spy thrillers in the late 60s.

Whether the Cherry Delight books qualify as spy thrillers can be debated. Cherry isn’t quite a spy. She is however a secret agent working for N.Y.M.P.H.O., a shadowy top-secret US government agency. N.Y.M.P.H.O. is mostly engaged in the fight against organised crime but some of their cases (including this one) do involve international intrigue. N.Y.M.P.H.O.’s methods are so unconventional that even the F.B.I. would consider them to be unethical.

Cherry is actually a gorgeous redhead by the name of Cherise Dellissio but inevitably everybody calls her Cherry Delight. She’s not just a secret agent, she’s also a high-class call girl. That’s actually part of her job. She belongs to an elite squad known as the Femmes Fatales. They work as prostitutes because it’s a useful cover and one that offers plenty of opportunities for them to get close to organised crime figures. Cherry doesn’t mind. If there’s one thing Cherry enjoys more than being a secret agent it’s having sex. Her job allows her to combine business with pleasure.

Cherry’s latest case has very definite international ramifications. The Mafia is forging links with tongs operating in Red China. It’s a disturbing development which has to be nipped in the bud. 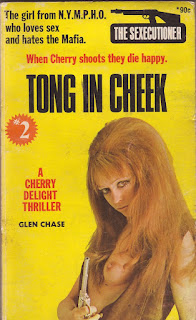 Once she gets to Hong Kong Cherry will be working with an Englishman named Derek Guyfford. He knows the territory and he happens to be a part-time N.Y.M.P.H.O. agent. Cherry is pleased that he seems to know his job. She’s even more pleased when he turns out to be very good in bed. Derek is keen to help Cherry make the hit on the three Mafia goons but he has another agenda as well. He has a more personal more selfish reason for wanting to go to China. A reason that could make him a vast amount of money. Money that he might be prepared to share with Cherry.

It has to be admitted that the Cherry Delight books are very very trashy. Fox’s prose is more than a little rough around the edges. There is however one thing that Fox understood. If you’re going to combine the thriller and erotica genres you have to make sure that your books deliver on both counts. There has to be plenty of sex and the sex has to be pretty explicit but there has to be lots of action and mayhem as well. And if possible you have to integrate the sex stuff with the thriller stuff. Fox made sure to do this.

Tong in Cheek is still reasonably good fun and if spy sleaze is your thing you’ll enjoy it.

You might want to check out my reviews of the first of Fox’s The Lady from L.U.S.T. novels, Lust, Be a Lady Tonight and the first Cherry Delight novel, The Italian Connection.