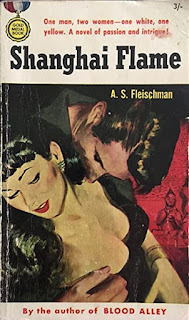 A.S. “Sid” Fleischman (1920-2010) was a New York-born professional magician who took up professional writing after the Second World War. He’s best remembered as a very successful writer of children’s books but he wrote a number of mysteries and thrillers. Shanghai Flame, published by Gold Medal in 1951, was his first spy thriller. Having spent the war in the Navy he had some familiarity with the Far East and that’s where this and most of his subsequent spy novels are set.
The narrator, Alex Cloud, is a newspaperman who likes drinking more than he likes working and he’s arrived in Shanghai to look for Flame. Flame is actually Paula Forrest, also an American reporter, and she’s the reason he drinks.
This is just after the Communist victory in the Civil War and the rumour is that Flame has gone over to the Reds.
Alex thinks that that the only reason he’s in Shanghai is to find Flame but he’s stumbled into something. He’s not sure what it is but it must be important because people are getting killed for it. He thinks it might have  something to do with a deck of cards. He runs into some old friends, although really they’re not exactly friends. They’re the types of people who’d be mixed up in anything that might involve a profit. They’re not political types but the Chinese Government seems to be taking an interest so maybe it is political.
And he has the opportunity to make lots of interesting new enemies. And he meets a a woman. Not Flame, but a Eurasian beauty named Ariadne. Alex is still in love with Flame, but that doesn’t stop him from ending up in Ariadne’s bed. That could cause difficulties with her husband, who is one of Alex’s old very disreputable (and very dangerous) acquaintances.
Of course he finds Flame but winning her back is another matter. Keeping her alive is a bigger priority. If he wants to keep her alive. Sometimes he’s not sure. He’s not sure if she’s forgiven him for sleeping with all those other women. He’s also not at all sure what she’s mixed up in but the Chinese Government has put a price on her head.
The bodies keep piling up. The action is pretty relentless in this story. Whether Alex ends up in a bar or a restaurant or a brothel or on a sampan, those bodies seems to keep accumulating. And Alex makes his own contributions to the body count. He spends more time with a gun in his hand that sitting at a typewriter like a good newspaperman.
Alex might be the hero but he’s definitely no Boy Scout. He’s quick with his fists and he has no great qualms about shooting people, or slapping women around. You have to be tough to be a newspaperman. This book belongs to the “ordinary guy gets entangled in espionage against his will” sub-genre but in this case the ordinary guy is no innocent.
While this does qualify as a Cold War spy thriller it doesn’t come across as being particularly political. Fleischman’s objective is to give us a two-fisted action thriller and he does a pretty good job. It’s a story just begging to be made into a movie. Spies, hardboiled reporters, an exotic setting, dangerous women, a McGuffin that lots of people are prepared to kill to get hold of, a stormy romance, lots of ambiguous but vaguely sinister characters, lots of violence and lots of implied sex - it has all the right ingredients. And if all that isn’t enough, there are also pirates.
Fleischman has no literary pretensions but he understands pacing and he knows how to write action scenes and he provides action in abundance.
Stark House have published this novel in a double-header paperback along with another Fleischman spy thriller, Counterspy Express (which was filmed in the late 50s).
Shanghai Flame is great pulpy spy adventure fun. It’s pure entertainment but it works just fine on that level. Highly recommended.
Posted by dfordoom at 11:18 AM