Day Keene's Sleep With the Devil 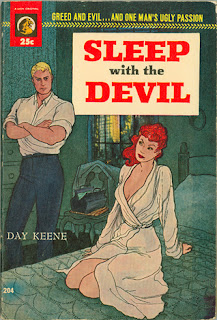 Gunard Hjertstedt (1904-1969) was an American writer of Irish and Swedish extraction who wrote about fifty novels, mostly pulp crime titles and mostly under the pseudonym Day Keene. He was also a successful writer for both radio (in the 30s and 40s) and television (in the 60s). The very noirish Sleep With the Devil was published in 1954.

Les Farron is a man with a plan and no morals to get in the way of the execution of said  plan. There are no spoilers whatever in what I’m about to tell you. Farron’s plan is laid out in detail for the reader in the first few pages of the book. Farron is a grifter and a part-time male model and part-time strong-arm man for loan shark Whit Bennett. Bennett’s activities are so outrageously illegal that Les figures it’s only a matter of time before the cops shut him down and there’s also the matter of the guy Farron beat up a bit too enthusiastically and the guy then, very inconveniently, died. So Farron reasons that the smart thing for him to do is to act before the cops do, kill Bennett and rifle his safe and then disappear.

The clever thing about Farron’s plan is that he has it all worked out how he’s going to disappear. He has discovered a little town called New Hope, about a hundred miles from New York, and he has a new identity for himself already established there. The folks of New Hope are ultra-conservative godly farmers. They’re not quite the Amish but they’re halfway there. No-one would ever think of looking for Farron there. In New Hope Farron is Paul Parrish, a devout Bible salesman.

New Hope has another attraction for Farron. That attraction is Amy. Amy is young and pretty and her father is very rich (these people are simple farmers but very successful ones and since they don’t drink or smoke or gamble they tend to accumulate wealth a pretty impressive manner). It should be possible for Farron, after lying low in New Hope for a while, to get his hands on her dad’s money. In the meantime he can marry Amy. That idea appeals to him. He’s never had a virgin before and he figures it could be exciting.

Farron is a smart guy. His plan is well thought out and he takes great pains with his preparations. He leaves nothing to chance. Nothing can go wrong. All he does to do it to wait things out in New Hope. That means going without the things that are as essential to him as breathing - cigarettes, booze and sex (or in the latter case going without sex until he and Amy are married). But he can do that for a few months. Well actually he gets really jumpy if he goes without those things for a few hours but as long as he keeps thinking about the money he’ll have at the end of it he convinces himself that he can do it.

And nothing does go wrong. In fact it all goes more smoothly than he could have imagined. It all goes smoothly, until it doesn’t. 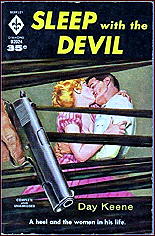 Farron is a protagonist with no redeeming qualities whatsoever. He possesses not the slightest trace of empathy for any other human being. Other people are potential sources of money, or in the case of women potential sources of sex. Amy is a potential source of both. Lydia, his girlfriend in New York, has a great body and she’s enthusiastic in bed. That’s all he wants from her. Of course all this means that he can’t always predict what other people will do. The idea that a person might be motivated by some other mention aside from greed or lust, or that a woman might be motivated by love - these are things that he cannot even comprehend. That could be a weakness.

This is a grimy sordid book, which of course is what the noir fiction genre is all about. It achieves its sordidness and griminess in fine style. Keene’s prose is stripped down and energetic.

There’s not a huge amount of actual violence. It’s the psychological brutality of Farron, his casual acceptance of violence as the normal way to deal with things, that has the impact. While Farron is sex-obsessed you won’t find any even moderately graphic descriptions of sex although there’s plenty of overheated eroticism.

Having half the action take place in New York and the other half in the radical different world of New Hope adds interest but it serves the author’s purposes in other ways. There’s also the contrast between the entirely corrupted Farron and the entirely uncorrupted Amy. And then there’s Lydia - is she one of the corrupted or one of the uncorrupted?

The ending might be thought to stretch credibility just a little but it works and there’s the ironic twist that you expect in noir fiction. Several ironic twists in fact.

Sleep With the Devil is a fine example of 50s noir fiction by a writer who has fallen into undeserved neglect. Highly recommended.
Posted by dfordoom at 12:42 AM