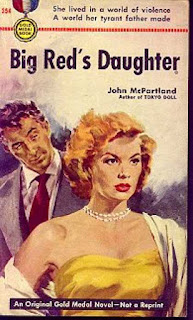 John McPartland’s Big Red's Daughter is a 1953 pulp crime novel. Chicago-born John McPartland (1911-1958) had a reasonable successful career as a novelist and screenwriter before his untimely death at the age of 47.

Big Red's Daughter tells the tale of 25-year-old Jim Work, fresh out of the army after a stint in Korea and now a college student on the GI Bill, living in Carmel in California. Jim’s problems begin when he has a minor car accident. The other driver, Buddy Brown, is a mean tough rich boy thug and it’s immediately obvious that Jim and Buddy are not going to get along. Of course there’s no reason their paths should ever cross again, or at least there would be no reason except for Wild Kearny. It’s not just that Wild is beautiful. She is, as far as Jim is concerned, the one. The one girl he wants and must have. Unfortunately Wild is Buddy’s girlfriend.

Jim is way out of his depth. The crowd Wild hangs around with are rich privileged kids and that’s a world Jim Work is never going to fit into. Jim knows that the sensible thing is to walk away from the situation and keep walking, but the moment he set eyes on Wild Kearny he knew he wasn’t going to be able to do that.

There are lots of added complications, a big one being Wild’s friend Penelope (Pen)  Brooks. Pen has exactly the same deeply unhealthy sexual obsession with Buddy that Wild has. The two women are rivals for the love of the same bad boy and women in that situation can be pretty dangerous.

There are enough overheated sexual passions and jealousies here to lead to big trouble so it’s no surprise that they lead to murder. The circumstances of the murder are ambiguous. To the police there’s an easy solution and cops like easy solutions. If you have an obvious suspect you make an arrest.

There’s another slight complication - Wild’s father. Red Kearny is not a gangster but he’s a union boss with enough muscle and money behind him to make even gangsters nervous. Red Kearny loves his little girl and if he thinks someone is going to hurt her then that someone is liable to end up dead.

For Jim it’s all a nightmare and there doesn’t seem to be a way out but there are two things that will keep him fighting - his overwhelming love for Wold Kearny and his overwhelming hatred for Buddy Brown.

There are countless fist fights but they aren’t conducted according to the Marquess of Queensbury rules. The aim is survival and to survive you use whatever means are necessary. This is a tough mean book about tough mean people. People don’t die neatly or easily in this book.

Jim is the narrator and he thinks he has things figured out. Maybe he does, or maybe he’s dead wrong.

There’s plenty of excitement here. Every time Jim looks like just maybe he might drag himself out of the hole he’s in some new nightmare confronts him and the nightmares just keep coming. It all moves along at a frenetic pace.

There’s no graphic sex but sex is what drives the story along. These are people driven by sexual lust and that applies to all of the men and all of the women. There’s not a single healthy emotional relationship between the whole lot of them. Just to make things nastier some are driven by greed as well. And hate. And fear. There’s lots of desperation and lots of sleaze.

This is classic noir stuff and classic pulp stuff. If that’s what you like then you should find Big Red's Daughter to be a very satisfying read. Highly recommended.
Posted by dfordoom at 1:55 AM