Derek Marlowe's A Dandy in Aspic 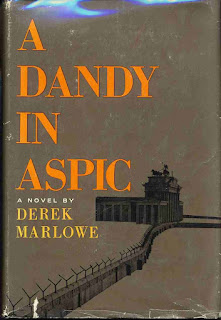 Eberlin is a spy. He works for the British. At least on the surface, but actually he’s a double agent. He really works for the KGB. While he occasionally passes information to them his main duties involves assassinations. He is thirty-six years old and has been a spy for the whole of is adult life. That’s a long career for a double agent. He is successful because although he is a Russian he is more English than most Englishmen. He is an educated and cultured man, always exquisitely dressed and a connoisseur of beautiful things. He is something of a dandy (in fact he idolises Beau Brummell). His real name is Krasnevin. At times he is not sure if he is really Eberlin or Krasnevin. A fuzzy sense of identity is an asset for a spy although it’s perhaps not quite so healthy for a human being.

Now he has two problems. The first is that he wants to go home. He wants to go home to Russia. He has grown weary of life as a spy. But to the KGB he is a very valuable asset and they are not likely to give him permission to return home.

His second problem is that the British have given him a new assignment. His mission is to track down a KGB assassin, a man by the name of Krasnevin. So he must hunt for himself, but of course without finding himself. Krasnevin is believed to be in Berlin so that’s where Eberlin is sent. To his horror he finds that Gatiss is there too. Gatiss is another British agent of whom he is somewhat afraid. Gatiss is the kind of man who might succeed in unmasking him, and he detests the man personally as well.

As an added complication there is Caroline. She’s a sweet girl. Eberlin avoids serious entanglements with women but it looks increasingly like he is going to be entangled with Caroline, although he’s not sure exactly what kind of entanglement it’s going to be.

Spy fiction deals a great deal with themes of betrayal. An interesting feature of this novel is that Eberlin is not a traitor. He is not merely Russian-born. He is a Russian citizen. A patriotic Russian doing his duty. He is also a good communist so in fact he is betraying neither his country nor his ideals. Of course espionage is still a grubby business of lies and deceit but it’s well to bear in mind that Eberlin is not a traitor. Spies do not have many friends but even by spy standards Eberlin is a loner. He is entirely self-contained. He is also somewhat inclined to introspection. Perhaps he thinks too much. He has given his current situation a great deal of thought and he does not like the conclusions he has been led to. Drinking helps a little. Maybe not much but he intends to stick with it. If he drinks enough things might look better.

The idea that both sides in the Cold War were pretty much equally cynical, ruthless and even dishonourable was becoming commonplace in British spy fiction, spy movies and spy television series by the 60s (the Callan TV series being a very obvious example). But a British spy novel with a protagonist who is a KGB assassin who has infiltrated the British intelligence service was still rather bold in 1966. And while Eberlin might not be a conventional hero he is certainly not a mere villain or even a conventional anti-hero. He has his faults but he is not an unsympathetic character. He is certainly no more of an anti-hero than David Callan, and as a man he is (despite some self-pity) no more contemptible and pathetic than George Smiley. And he’s no more cynical than Len Deighton’s unnamed spy.

Marlowe seems to have spent his writing career flitting back and forth between mainstream and genre fiction. A Dandy in Aspic certainly has some literary aspirations. It also works as a tense spy thriller with some neat twists. Highly recommended.

My review of the 1968 film adaptation can be found here.
Posted by dfordoom at 6:03 AM