Erle Stanley Gardner's The Case of the Empty Tin 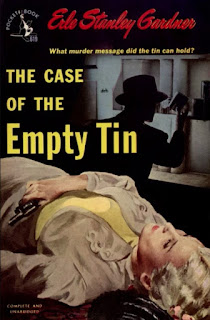 The Case of the Empty Tin is a 1941 Perry Mason mystery by Erle Stanley Gardner.

The tin referred to in the title is a tin of preserves, only there aren’t any preserves in the tin in question. The tin is empty but has been carefully sealed up. And nobody knows how it came to be on the shelf in the basement of the Gentrie home. It’s just a minor domestic mystery and couldn’t possibly have anything to do with the murder that took place next door. But Perry Mason is interested in any and all mysteries.

The house next door to the Gentrie house comprises two flats. There seems to have been a shooting in the downstairs flat. Certainly a gunshot was heard. Perhaps two gunshots. Bloodstains were found. The occupant of the apartment and his housekeeper are both missing.

Perry Mason’s client is the man who lives in the upstairs apartment, a Mr Karr, a man who has reasons for not wanting to attract any publicity. In fact he’s so horrified by the prospect of publicity that he hires Mason to help Lieutenant Tragg solve the case as quickly as possible. Mason is happy enough to do so and he puts the Paul Drake Detective Agency to work digging up leads.

Mr Karr is crippled by arthritis and confined to a wheelchair so he can’t possibly be a suspect. On the other hand he does think it possible that he might have been the intended victim. He has been involved in some very legally ambiguous business dealings in China, the sorts of business dealings that can potentially lead to murder. Actually gunrunning is perhaps more than just legally ambiguous.

This is another case that sees Perry Mason sailing close to the wind as far as the law is concerned. Perry is never one to tell the police things that he doesn’t think they need to know but not reporting dead bodies is definitely taking a risk. He’s also risking his friendship with Paul Drake. Drake is used to Mason’s risk-taking but he does at least like to be told when Mason is leading him into a legal minefield. Mason in fact is much more reckless than usual in this story. There's a particularly memorable scene in which Perry and Della bluff their way out of a situation which seems certain to lead to their arrest for breaking and entering.

The tin itself is obviously going to turn out to be an important clue, and it’s a very clever (if slightly far-fetched) one.

There are other vital clues that are cunningly contrived to contain various layers of ambiguity, and even Perry Mason is led astray by one such clue.

In this story Perry Mason mostly acts as a de facto private detective with surprisingly few opportunities for pulling legal rabbits out of hats. It’s one of the rare Perry Mason novels that does not include a single courtroom scene.

Lieutenant Tragg and Perry Mason are not always on the most cordial terms but this time they more or less on the same team, even if Tragg still has his suspicions that Mason is trying to put one over on him.

Mason is definitely trying to set traps for the chief suspects. Tragg is trying to do the same thing. And the murderer is setting traps as well. Setting traps for various persons, including Perry Mason.

The plot is fiendishly complicated. Gardner does his best to play fair with his readers.
He was a master craftsman but at times in this book the plot does seem to be in danger of collapsing under its own weight. It does hold together, but only just.

The Case of the Empty Tin is not quite a typical Perry Mason mystery and it’s also not quite in the front rank of the Perry Mason stories. It’s still good entertainment and can still be recommended to fans.
Posted by dfordoom at 2:32 AM