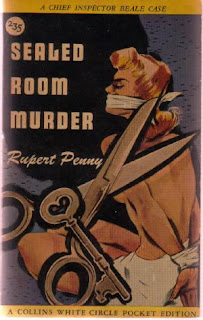 Rupert Penny was one of the pseudonyms used by Ernest Basil Charles Thornett (1909-1970), an English author who wrote a small number of mystery novels between 1936 and 1941. Sealed Room Murder was one of his last mysteries, published in 1941. It is, very obviously, a locked-room mystery.

This is a book that makes us wait a long long time for the murder. Private enquiry agent Douglas Merton is hired to find out who is harassing Mrs Harriet Steele. It’s almost certainly someone from within her own household, and what a grotesque household it is.

Harriet Steele had been an acrobat but she is now obese, crude and thoroughly unpleasant. By the terms of a very cruel and malicious will a tribe of penniless relatives lives with her, all hoping that somehow they can find a way to get their hands on the Steele fortune. The will forces Harriet to put up with them but she doesn’t have to like it and she doesn’t have to make things pleasant for them. And she certainly makes things incredibly unpleasant for them.

Now it appears that one of them has decided to strike back by launching a low-level campaign of intimidation. Clothing has been ruined, a very expensive mink coat has been slashed, Harriet’s clocks (she collects clocks) have been sabotaged, and expensive flooring has been hacked to pieces.

Harriet is a monster but the rest of the family are not much better. Merton is inclined to think that they all deserve each other. Except for Linda. Linda is different. Linda is a lovely girl. Linda could not possibly have anything to do with anything nasty or malicious. Douglas Merton is not exactly an unbiased witness on the subject of young Linda Whitehead.

Merton’s presence in Harriet Steele’s ugly and depressing house doesn’t deter the miscreant behind the harassment. In fact things start to escalate. And various members of the household report having items stolen or maliciously damaged.

The book mainly consists of a lengthy first-person account of Merton’s inconclusive investigations of the harassment of Harriet Steele. Merton tells us right from the start that he’s not much of a detective and I think most readers will agree with his self-assessment. The point of this lengthy prelude to murder is to establish the dynamics of the household and to establish that while everyone in the house had reason to hate Mrs Steele a number of people had possible motives for wanting to do away with her. We already know, because we’ve been told, that it’s going to end in murder so this is all by way of getting us to indulge in speculation on the identity of the killer even before the murder takes place.

Once the murder takes place the actual investigation of that crime (by Chief Inspector Beale of Scotland Yard) is quickly disposed of. Which is an interesting and decidedly odd choice on the part of the author because this is a detective story in which the whodunit aspect is of very little importance. It’s the how that is important - that’s the aspect of the story in which Penny has invested all his ingenuity and on which the success of the book must stand or fall.

And the how is very very complicated indeed! There are numerous floor plans and diagrams and they’re all needed. It’s the kind of murder method that no real-life murderer would even contemplate, not only on account of its complexity but also because there are so many ways in which it could have failed. On the other hand it is certainly very clever. If you’re a connoisseur of bizarre murder methods and outrageous impossible crimes then this novel should prove eminently satisfying.

It’s also reasonably fairly clued, although even with plenty of clues the fiendish complexity of the murder will probably be enough to ensure that most readers will remain mystified until Chief Inspector Beale’s final explanation.

While the long long lead-up could be seen as a weakness it’s actually quite entertaining, especially if you enjoy books with a plenitude of grotesque characters. Douglas Merton is an interesting protagonist because he’s a private detective but in fact he’s entirely useless in that capacity (although he’s a pleasant enough young chap). There’s no proper detecting done until Chief Inspector Beale’s arrival on the scene. There are plenty of detective stories in which a brilliant amateur solves a case that is beyond the powers of a baffled and incompetent professional. This is a story in which a brilliant professional solves a case that has left an incompetent amateur befuddled and bewildered.

Rupert Penny’s mysteries were re-issued a few years back by Ramble House. So they’re available, but they’re just a little on the pricey side.
Posted by dfordoom at 3:51 AM