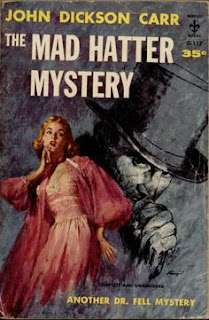 The Mad Hatter Mystery, written in 1933, was the second of John Dickson Carr’s Dr Gideon Fell mysteries. It gives Carr the opportunity to indulge two of his particular enthusiasms - for gothic horror and for farce.

These enthusiasms are obvious right from the start. A young man is found dead, clearly murdered, near Traitor’s Gate in the Tower of London. To make things even more medieval the murder weapon is a crossbow bolt. The farcical touch - the corpse is dressed in a golf suit but is wearing an opera hat that is absurdly over-large.

Carr was famous as the master of the locked room mystery but The Mad Hatter Mystery is not a locked room puzzle. It is not even an impossible crime. A most strange and extraordinary crime certainly, but definitely far from impossible.

Chief Inspector Hadley finds himself with a multiplicity of crimes to solve - there is not merely a series of hat thefts and a murder, there is also a stolen manuscript. It’s the manuscript of a hitherto unknown Edgar Allan Poe detective story. This makes it immensely valuable and of course it’s a lovely playful touch to have a detective story about the theft of a detective story.

Even with Dr Fell’s help Hadley finds this to be a tough case. Finally we are approaching the end of the book and the mist begins to clear and the truth is revealed. The solution is strange and complex but it’s undoubtedly true. Except that it isn’t. So it’s back to the drawing board. Thankfully the real solution is now obvious. Except that it isn’t. It seems that it will never be possible to get to the bottom of these strange crimes.

This is a dazzling display of plotting pyrotechnics by Carr.

Physical evidence plays very little part in this mystery. Alibis on the other hand are important. Motives are crucial but in this case not always easy to pin down. A major  problem is the fact that the murder is not the only crime to be considered. A satisfactory solution will have to tie together all those crimes, and the motives for all those crimes.

This is a very funny book. Carr loved to add touches of humour to his book and on occasion he would lay on the comic elements with a shovel. Sometimes he overdid it but The Mad Hatter Mystery is a fine example of how to write a very amusing mystery that is still a superbly crafted example of the art of the detective story and to emphasise Carr’s complete mastery he also manages to make it an emotionally affecting novel. However bizarre the circumstances murder is still tragedy.

If you’re a hardcore Dr Fell fan then the good news is that he’s at the centre of things right from the start.

I don’t intend to give even the slightest hint about the ending. All I will say is that some readers will disapprove.

I haven’t read enough of Carr’s work to be able to say whether this qualifies as one of his best books but I certainly found The Mad Hatter Mystery to be insanely enjoyable. Highly recommended.
Posted by dfordoom at 1:47 AM