John Dickson Carr’s The Three Coffins (AKA The Hollow Man) 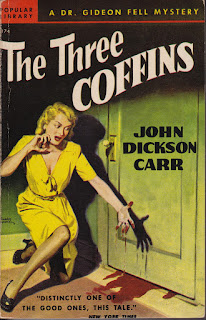 John Dickson Carr’s The Three Coffins (also published as The Hollow Man) is a 1935 Dr Gideon Fell mystery and it is of course a locked-room mystery. And a very celebrated one.

Carr was rather unusual among golden age crime writers in combining a love for the rigorous plotting and implacable logic of the detective story with an equally intense love for the more outré elements of gothic fiction. The remarkable thing about Carr is that he consistently managed to combine these two somewhat contradictory elements so successfully.

The Three Coffins begins in classic gothic style. Professor Grimaud has devoted his life to the study of the occult but he is a very convinced skeptic on the subject. A rather strange individual accosts him at his favourite tavern. This man, Fley, makes some extraordinary claims, claims which appear to be most definitely of an occult or at least a paranormal nature. The claims also sound decidedly like threats.

Then we switch to the classic locked-room genre, Grimaud is murdered. The murderer could only have left the room in which the slaying took place by one of two exits. A quick glance at the window makes it clear that he could not possibly have left by this means. Therefore he must have left by the door but the door was found locked from the inside and was for the whole time during which the murder took place under direct observation by two independent witnesses. Therefore he did not leave by the door either. All this is bad enough but there’s also the matter of the footprints which must be there but they aren’t.

The second murder is even more impossible. A man is shot at close range in the middle of a public street in front of three witnesses but no-one sees the murderer.

Meanwhile the gothic atmosphere keeps creeping back in, with hints of dark deeds in Transylvania (!) and freshly dug graves.

There are magicians, acrobats, amateur criminologists, dusty scholars and mathematical whizz-kids and there are mysterious females with shady backgrounds and any one of them could be the murderer.

This book contain’s Dr Fell’s famous locked-room lecture. Dr Fell justifies this lecture by reminding the other characters that they are after all characters in a detective story so why shouldn’t they discuss the mechanics of detective fiction?

In fact the whole book can be thought of as a detective story about detective stories. There’s a good deal about stage magic in it and a locked-room or impossible crime mystery is after all essentially an exercise in stage magic. The writer is an illusionist, practising the various facets of the craft of illusionism (such as misdirection). Carr is in a sense letting us in on some of the secrets of the trade. It’s a measure of just how confident he’d become by this time - he felt sure he could tell us how his tricks were done and that he could still deceive us.

Magic really is a major theme here, with Grimaud being the expert in real magic (which doesn’t exist) and Fley being the expert in fake magic (which does exist). Illusionism crops up in countless golden age mysteries but I can’t recall any other examples of the theme being explored with the same mixture of intelligence, perceptiveness and playfulness that Carr brings to the subject.

One of the points made in Fell’s lecture is that readers are often disappointed when a really intriguing locked-room mystery turns out to have a simple explanation. There’s no need to worry about that in the case of The Three Coffins - the solution is fiendishly complex. But does it actually work? It was certainly a gamble on Carr’s part - one false step and the whole edifice of the plot would have come crashing down around his ears. I think he gets away with it, although it’s a close-run thing. Which in some ways makes the book even more impressive, since Carr was challenging himself as well as the reader. You get the feeling that Carr loved writing puzzle-plot detective fiction not because it was easy (as so many foolish critics then and now seem to think) but because it was something that was exceptionally difficult to do well.

The Three Coffins is breathtakingly ambitious and it’s also hugely enjoyable. Highly recommended.
Posted by dfordoom at 2:58 AM