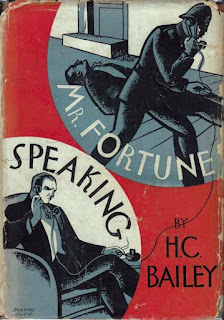 If you’re the sort of reader who has an allergic reaction to detectives such as Lord Peter Wimsey and Philo Vance then you might well feel some trepidation at the thought of sampling H.C. Bailey’s Mr Fortune stories. Even by the standards of languid, affected upper-class amateur detectives Reggie Fortune is particularly languid and particularly affected. And yes, he does quote poetry. In some ways he’s an even more extreme version of Lord Peter Wimsey.

By now I’ve probably convinced most of you to take active steps to avoid the Mr Fortune stories. Which would be a great pity as they do have their own distinctive flavour and they’re actually very enjoyable.

Despite the superficial resemblances to Wimsey and Vance the Mr Fortune tales are considerably more cynical and they do tend at times to be quite dark.

Reggie Fortune is a qualified medical practitioner who has gained a considerable reputation as a detective. He is sometimes called in by other physicians, at other times by Scotland Yard, and his services are often retained by the prosecution in particularly difficult cases. Curiously enough although he does not appear to hold any official police rank he often refers to himself as a policeman.

Bailey enjoyed enormous popularity during the 20s and 30s but become unfashionable in the postwar years and these days languishes in obscurity. Bailey wrote several Mr Fortune novels but has always been admired more for his short stories. Mr Fortune Speaking, published in 1930, is one of the many Reggie Fortune story collections.

You have to remember that these are short stories so the plots don’t have the complexity you’d find in a detective novel but the stories are still well thought-out and clever.

Zodiacs is a crime story but the crime is not at all what it appears to be. It all starts with Zodiacs, Zodiacs being the last share craze that all the best people are investing in. You just can’t lose by buying Zodiac shares, at least that is until the shares unexpectedly slump. And then murder follows.

The murder itself is quite straightforward, except that the victim was soaking wet which worries Mr Fortune a little. Mr Fortune would also be a deal happier if he could see the dead man’s hat.

This is a very neat little story which has a good twist and then there’s another twist which is the one that really counts.

In The Cat’s Milk Mr Fortune’s assistance is requested by a doctor who is not entirely happy about an accident that has befallen an elderly lady. It doesn’t take long for Mr Fortune to be very unhappy about the case as well. He would not have been particularly concerned had the cat not refused his milk. In its essentials it’s a fairly straightforward story in which one or more family members may or may not be planning to do away with an elderly person in order to gain an inheritance. Mostly straightforward as I said, but done with a great deal of style.

The Pink Macaw begins with a businessman who has received a threatening letter. The threat is a puzzling one and the businessman claims to have no idea of the identity of the person making the threats or even the exact nature of the threats. Scotland Yard is concerned but it’s all so value there’s really nothing they can do. Nonetheless it appears that the threats had some substance after all as they lead to a man’s death. It seems a straightforward case of self-defence, until the case takes a very surprising twist.

The Hazel Ice involves a tragic mountaineering accident, the circumstances of which seem just a little odd. Bailey makes good use of the alpine setting. A very good story.

The Painted Pebbles is an amusing tale about an archaeologist of advancing years who believes he has made an extraordinary discovery. It’s clearly a fake but Mr Fortune is not sure why the old professor believes it. Someone may be influencing him and there are several possible candidates. And what could the motive be? A fun story.

The Woman in Wood is one of my favourites from this collection. Reggie Fortune is rather entranced by a wooden statuette he finds in an antique store. The proprietor claims it’s medieval but Reggie can see that it’s clearly a modern work. And yet it has the feel of a medieval work. Reggie unfortunately misses out on buying the statuette but it’s not the last he will hear of it. A letter from his sister (married to a bishop) alerts him to an ecclesiastical drama in the country. A stolen kiss and a burglary in which nothing is taken add further mystification.

The various threads come together very nicely, there’s some danger and suspense and Mr Fortune is in fine form.

The German Song is a fairly strong story. To unlock the mystery behind a spectacular robbery Reggie must first break a cipher and it’s a cipher that is almost unbreakable, unless of course you happen to know your Goethe. Luckily Reggie knows his Goethe very well.

The Lion Fish confronts Mr Fortune with two violent murders, murders which appear to have little in common except that both are seemingly motiveless. One clue points to a family named the Landomeres, but they’ve all been dead for five hundred years. There are some decent twists in this tale and we get to see a rather determined and rather ruthless Fortune in action. A fine story.

Despite his affectations and his occasional indulgences in ennui and a kind of resigned pessimism I like Reggie Fortune very much. He’s more complicated than he seems to be. He does take crime quite seriously and when confronted by wanton cruelty he responds with surprising ruthlessness.

The Mr Fortune short stories are much more highly regarded than the novels (although Shadow on the Wall is actually very good). Bailey is a much neglected master of golden age detective fiction. Mr Fortune Speaking is immensely enjoyable. Highly recommended.
Posted by dfordoom at 1:27 AM