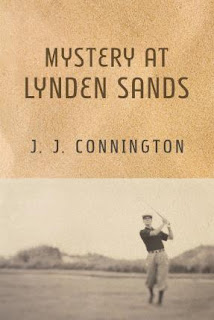 Mystery at Lynden Sands, published in 1928, is one of J. J. Connington’s earlier mysteries featuring Chief Constable Sir Clinton Driffield. Driffield is having a pleasant holiday at the seaside and of course as any fan of mystery fiction knows when a detective decides to take a holiday murder is sure to follow him.

The murder victim is Peter Hay, an amiable and much-loved old man who acts as caretaker at Foxhills, the estate of the Fordingbridge family. Foxhills is not very far from the hotel at Lynden Sands when the Chief Constable has been hoping to enjoy his little vacation. Peter Hay didn’t have an enemy in the world and he apparently died of natural causes but Dr Rafford refuses to sign the death certificate. Those odd marks on the victim’s wrists worry him just a little.

Inspector Armadale is a little uneasy as well, in fact uneasy enough to request the Chief Constable’s personal assistance on the case.

The Fordingbridges are having a drama of their own. Paul Fordingbridge’s nephew Derek hasn’t been heard from in years and it is assumed that he was killed during the war. Now Derek has suddenly turned up. Derek claims to have been wounded during the war, which explains why his face is so disfigured as to be unrecognisable. The wound affected his mouth as well, which explains why his voice is also unrecognisable. His handwriting has changed as well, due to the loss of two fingers. There are no fingerprints on file for Derek so there’s no possibility of identifying him positively in that way. Paul’s sister Jay is however perfectly certain that it is Derek. She is in touch with the spirit world and the spirits assure her that Derek is still among the living.

Then a body is found on Neptune’s Seat, a rock in the sea that is uncovered only at low tide. There are quite a few sets of rather interesting footprints on the beach and they seem likely to turn out to be vital clues.

There are all kinds of dramas going on and they all seem to be connected with the Fordingbridge family. The connections between these dramas are however very unclear. Solving any of the mysteries is going to require the tying together of all these threads. Both Connington as author and Driffield as detective succeed in doing so and doing so with great skill.

This is fairly typical of Connington at his best. The plotting is intricate and very tight. Sir Clinton’s approach to the investigation is uncompromisingly logical and rational. His old friend Squire Wendover is naturally involved, and just as naturally the good-hearted Wendover can’t help seeing the case in purely emotional terms.

Inspector Armadale is an efficient and thorough investigator and entirely professional. Not surprisingly he and Wendover clash since the inspector is not a man to allow emotion to distract from his duty.

Towards the end there’s a definite thriller flavour that starts to creep in. One could almost go so far as to say that there’s a hint of Edgar Wallace. This is a classic puzzle-plot mystery with the emphasis on fair play and on the methodical sifting of clues but the touch of excitement and drama at the climax is welcome nonetheless.

There are a few far-fetched moments, as there always are in golden age mysteries, but Connington has a knack for making them seem perfectly plausible.

Sir Clinton Driffield is perhaps the most ruthless, and is certainly the most unsentimental, of all golden age detectives. He is at his most ruthless in this novel. He has also has a breathtakingly acid tongue. It makes him of the more interesting fictional detectives. Maybe it’s easier to respect him than to love him but he’s unfailingly entertaining.