Erle Stanley Gardner’s The Case of the Substitute Face 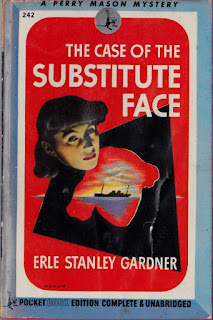 The Case of the Substitute Face was the twelfth of Erle Stanley Gardner’s Perry Mason mysteries. It was written in 1938 and it’s a fine entry in the series. It’s a murder at sea story, something I’m personally extremely fond of.

This one starts in Honolulu. Perry and Della Street have been on holiday. A large part of the action takes place on the ship on their return voyage to San Francisco.

A female passenger, a Mrs Newberry, wants Perry’s help. She tells him a complicated story involving her suspicion that her husband had been guilty of embezzling from his employer, the Products Refining Company. Perry explains that it’s not the sort of case he deals with but then he decides that it could provide some interest after all. It will also provide an opportunity to do a good deed for a charming young lady. Mrs Newberry explains that her main concern is the effect that a scandal would have on her daughter Belle, Belle being the charming young lady. Even Della thinks Belle is delightful, and she’s a bit less inclined than Perry to be dazzled by a pretty smile.

Mason cooks up a rather clever plan. He will try to cut a deal with the Products Refining Company whereby Mr Newberry can stay out of prison by agreeing to return most of the money (the portion he hasn’t spent). It’s all going splendidly until the murder takes place.

As in practically every Perry Mason story the lawyer is already on the scene and well and truly involved before the actual crime takes place. The accused is almost always already Mason’s client.  This is an essential part of the Perry Mason formula. The Perry Mason mysteries can be seen as illustrating Gardner’s view of how a defence would always be conducted in an ideal world, with the defence attorney on the spot to prevent the police and the District Attorney from coercing or tricking the accused into making damaging admissions. Gardner felt very strongly that the system was stacked against the little guy and a large part of this came down to the fact that ordinary people simply do not know their rights under the law. In this case Mason is able to make quite sure that his client says nothing whatever to the police.

This case hinges to a large degree on identity. There are eyewitnesses, they saw the murderer and the victim, but the murder took place on an open deck and at the time the ship was in the middle of a severe storm. The eyewitnesses cannot actual identify either the murderer or the victim. The Deputy District Attorney’s satisfaction with what seems like an open-and-shut case turns to disillusionment as Perry reveals that the case rests on certain major assumptions and those assumptions rest on nothing whatsoever.

The witnesses are interesting. They all saw important things, but not the most important things, and what they didn’t see ends up counting for more than what they did see. And eyewitnesses have to be treated with suspicion. The more certain an eyewitness is, the more likely he is to be wrong. The Perry Mason books are full of nice little observations on the quirks of the legal system, which Gardner slips in without ever giving the impression of lecturing the reader.

As usual Mason doesn’t trouble himself too much with legal ethics, and even indulges in a spot of breaking and entering (much to the dismay of Paul Drake).

At the end of the story Perry Mason is annoyed with himself because he didn’t unravel the mystery earlier even though the clues were obvious and the conclusions to which they pointed were obvious. The reader may end up feeling the same way. It’s the mark of a true master of the puzzle-plot mystery to be able to leave the vital clues right out there in the open in plain sight whilst still being confident of being able to lead the reader up the garden path. And Gardner was certainly one of the masters.

Mason is far from infallible in this story. He is taken by surprise once or twice and he even develops doubts about the outcome of the trial.
The courtroom scenes are fairly brief. Gardner understood that lengthy courtroom scenes can become very tedious so he made sure that when he put Perry Mason in court something startling would happen, something absolutely crucial to the plot, and it would happen without wasting too much time.

The Case of the Substitute Face is wonderful entertainment. Highly recommended.
Posted by dfordoom at 2:19 AM