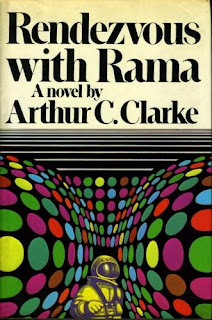 In the 22nd century a large asteroid is spotted. There’s nothing unusual about that but this seems to be a slightly odd asteroid. For one thing it’s remarkably symmetrical, and for another it’s spinning a lot faster than any known asteroid. It’s odd enough for astronomers to take some interest in it and when they do so they’re in for a shock. The asteroid, which has been given the name Rama, is a perfect cylinder and it’s hollow. This is no asteroid, this is a spaceship. And it's a very big spaceship - it's about fifty kilometres in length.

This is much excitement among scientists, and much consternation among bureaucrats and politicians. This is the moment that both have been awaiting, with both hope and dread - First Contact.

Given the fact that this spaceship’s course has taken it nowhere near any stars for half a million years or so it seems very unlikely that there could be anything alive on board Rama. Even the most advanced technologies for recycling air, water and wastes could not have maintained life for so long. Rama must be a dead empty shell, of immense interest to archaeologists of course, but still completely dead.

The United Planets, who rarely agree on anything, manage to agree to send the spacecraft Endeavour to rendezvous with this strange intruder in our solar system. Time is short - within a few months Rama will have left our solar system forever.

Rama proves to be a gigantic hollow habitat, with artificial gravity provided by its spin. The interior is a very strange landscape indeed. Not surprisingly, Rama is indeed dead. Or so it appears at first. 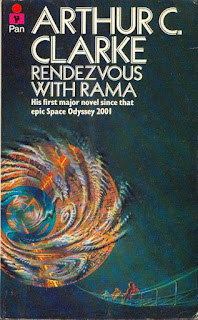 Clarke was always at his best when working on a truly colossal cosmic scale, with time spans of millions of years. In Rendezvous with Rama he is very much playing to his strengths. Clarke was an atheist who was fascinated by religion and his books often pose questions that are not merely philosophical but quasi-religious. Questions about the purpose of existence, the destiny of the human race, the nature of life itself. Earth’s encounter with Rama poses several such questions. Most pertinent in this case is the question of the nature of life. Does Rama contain life or not? Clarke wasn’t interested in easy glib answers to these sorts of questions. His objective was to get the reader thinking about the concepts rather than claiming to have absolute answers. Rendezvous with Rama tantalises us with possibilities but offers no certainties.

The biggest criticism leveled at Clarke throughout his career was the almost non-existent degree of characterisation. It should be noted that this criticism was most often voiced by people who failed to understand that science fiction does not play by the rules that apply to literary fiction. For Clarke cardboard characterisations were a feature, not a bug. He had no desire to distract the reader with the tedious emotional lives of his characters. His books were about big ideas. If you want characterisation then Arthur C. Clarke is not the author for you.

Clarke liked to keep the science in his books reasonably plausible. Rendezvous with Rama deals with interstellar travel on the grand scale but without invoking faster-than-light travel. Rama itself is impressive but despite its vast scale it’s also a theoretically possible technology. At the same time he manages to make his alien world genuinely alien, and he does so without making it sinister in any obvious way. The world of Rama is neither comforting nor threatening - it’s disturbing merely because it’s so wildly unfamiliar and inexplicable. It’s a puzzle without a solution.

Clarke may have written better books than this but Rendezvous with Rama is still absolutely essential reading for any science fiction fan. Highly recommended.
Posted by dfordoom at 4:39 AM