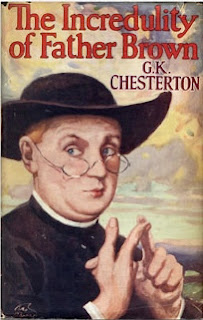 The Curse of the Golden Cross involves an American professor named Smaill, on his way to Surrey in England to investigate a rumour than an unusual Byzantine gold cross has been unearthed. The only other cross of similar type was discovered a few years earlier by Professor Smaill himself. At the time of his original discovery, as he later explains to Father Brown, he was threatened with death. He did not see the person who made the threat.

The newly discovered cross was found by an English country clergyman who is a little concerned because the cross apparently comes with no less than three curses. Professor Smaill is also increasingly worried. In fact tragedy strikes not once but twice.

The solution, delightfully, hinges on a proper understanding of mediaeval civilisation.

In The Resurrection of Father Brown Chesterton loses interest in detection altogether. It’s a story about faith and miracles and politics and the abuse of miracles. Father Brown is running a mission station in South America and gets caught up in a political dispute. It might be good Catholic apologetics but as a detective story it is very poor indeed.

The Miracle of Moon Crescent is a rather fine locked-room mystery about the extremely puzzling death of an American philanthropist. The solution is plausible and it’s also (by the standards of locked-room puzzles) elegant and simple. One thing that I have noticed in this collection compared to the earlier Father Brown collections is that Chesterton seems more inclined to succumb to the temptation of halting the action so that Father Brown can deliver little lectures on questions like faith and miracles and materialism. Chesterton always had this inclination but it does seem to be given freer rein here. Luckily in this story it’s not entirely out of place. After all it is a story of an impossible crime so the question of credulity is quite relevant. And it is a good impossible crime tale.

The Doom of the Darnaways is one of the best stories in this collection. The grand but decaying house half sunk in the sea, inhabited by an equally grand but decaying family, provides a superb background. It’s a story that is reminiscent in some ways of much of the gothic fiction of the late 18th century, leading the reader to believe that the solution has to be at least partially supernatural but Father Brown is sceptical of such supernatural explanations.

The Arrow of Heaven concerns the murder of an American millionaire. Father Brown is in the United States and is called in to investigate threats against the millionaire’s life by the mysterious Daniel Doom. The little cleric is alas too late to save the millionaire. An arrow is an unusual murder weapon for the modern United States - in fact the elaborate security precautions taken to protect the victim’s life were based on the assumption that the would-be assassin would employ something sensible, like a revolver.  Father Brown solves the case and finds time to deliver a little lecture on the subject of private vengeance.

The highlight of this story is the millionaire’s home - a stark steel tower with only a single window on the top level, with access only by a single elevator, and surrounded by an electrified wall. The story is another impossible crime story with an incredibly simple yet elegant solution. 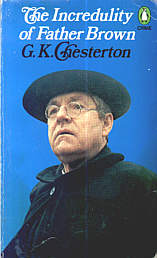 The Dagger with Wings is I think one of the best of all the Father Brown stories. A wealthy old man had three sons, plus an adopted son. The adopted son dabbled in the occult and had a general evil reputation which resulted in his being written out of the old man’s will. A series of accidents has led to suspicions of foul play and now only one brother has left and he hopes that Father Brown can protect him from the wrath of his adopted brother.

This is yet another impossible crime story. If the solution to The Arrow of Heaven was a miracle of simplicity and elegance then the solution to this one is a triumph of ingenuity and complexity but the results are even more satisfying.

The Oracle of the Dog is one of the most famous of the Father Brown stories. And yes, you guessed it, it’s an impossible crime story.

At no time does Father Brown go within a hundred miles of the scene of the crime. A young man named Fiennes tells Father Brown about a recent sensational impossible crime. Colonel Druce was found, stabbed to death, in his summer-house. There is only one entrance to the summer-house and it can only be approached by a single path and both entrance and path were under observation by three independent witnesses at the time of the murder. The colonel was alone in the summer-house. It is quite impossible that he could have been murdered, but there is no question that he was murdered. Fiennes is convinced that the odd behaviour of the dog Nox holds the key to the mystery. He is correct, but he fails to understand the meaning of the dog’s behaviour.

Father Brown has some ideas about this murder. A few days later Fiennes returns and Father Brown tells him how the crime was committed.

Chesterton was addicted to impossible crime stories but he preferred fairly straightforward solutions. He generally avoided secret passageways, trap-doors, infernal machines and gadgets. The Oracle of the Dog is a fine example of the Chesterton method. Father Brown solves the puzzle because he understands that dogs do things for dog-like reasons rather than human-like reasons. Chesterton also loved stories with a moral. This one however is more concerned with psychology - both human and canine. It’s a story that really does live up to its very high reputation.

The Ghost of Gideon Wise is an exasperating story. Much of it consists of Chesterton dilating upon such diverse subjects as penitence, conversion, the evils of bolshevism and the evils of capitalism. All very irritating to the reader (unless you happen to be intensely interested in those subjects), but hidden away amongst all this is a clever impossible crime story with a nice little unbreakable alibi twist.

This is the sort of thing you just have to accept about Chesterton. The Father Brown stories are detective stories and they’re also religious tales and moral speculations and political diatribes. In this collection these tendencies are even more pronounced than in the earlier collections. Chesterton believed he could combine all these elements successfully. Whether he did succeed is a matter for the individual reader to decide. It is worth reiterating though that they really are  detective stories and often very fine examples of the breed. Chesterton’s love for the detective story was quite genuine and quite ardent.

Of the eight stories in this collection one, The Resurrection of Father Brown, is a complete dud. One, The Ghost of Gideon Wise, is heavy going but the solution makes it just about worth the effort of reading. The Doom of the Darnaways is slightly disappointing as a detective story but the superb atmosphere offers more than ample compensation. The Curse of the Golden Cross, The Arrow of Heaven, The Miracle of Moon Crescent, The Dagger with Wings and The Oracle of the Dog are all top-notch stories.

The Incredulity of Father Brown is a more than worthwhile collection. Despite a couple of misfires it can be highly recommended.

Four of the best stories here (The Curse of the Golden Cross, The Arrow of Heaven, The Dagger with Wings and The Oracle of the Dog) were adapted for the excellent 1974 Father Brown TV series which I reviewed here.