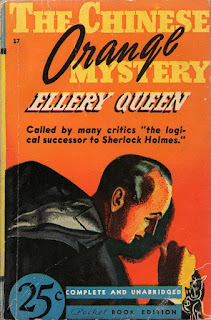 The Chinese Orange Mystery appeared in 1934. It was the eighth of the Ellery Queen mysteries written by Frederic Dannay and Manfred Lee (not counting the Drury Lane books published under the Barnaby Ross pseudonym). And it has a wonderful setup.

A fat little man is murdered on the twenty-second floor of the Hotel Chancellor in New York. Everything about the murder is backwards. The victim’s clothes are on back-to-front. Every item in the room has been turned back-to-front as well. As the case progresses more backwards items emerge. Even Ellery Queen has to confess to being puzzled.

The twenty-second floor is occupied by the wealthy Kirk family - the elderly curmudgeonly scholar Dr Kirk, his son Donald and daughter Marcella. The body was found in Donald Kirk’s office. In partnership with the rather snobbish Felix Berne Donald runs an up-market arty publishing business known as the Mandarin Press (one of the many links to China in this story).

As well as everything about the murder being backwards there are also various connections to both China and stamp collecting. One particular stamp plays a vital role in the story and that stamp happens to be a great rarity - because it was printed backwards!

There’s another puzzle that has to be unravelled - the identity of the murder victim.

The setup is so clever and the idea of the backwards crime is so original that you can’t help worrying that the solution, when it’s finally revealed, will be a letdown. Fortunately though it doesn’t disappoint. It’s far-fetched certainly but it’s conceived with such skill that we have to admit that it really is plausible. The motive and identity aspects are also tied in with the murder method in an intricate and entirely satisfying way. There’s also some fine misdirection. I have to confess that I didn’t have the remotest idea of the identity of the murderer until Ellery revealed it. As a pure puzzle plot this is one of the very best of the Queens.

There’s also some fun stuff about stamp collecting, such as the fact that some collectors specialise entirely in “locals” - semi-official stamps issued before proper government-controlled postal systems were established. The rather curious obsession that stamp collectors have for flawed or misprinted stamps adds an amusing touch and becomes a plot point as well.

This is also very much a New York novel. By the mid-30s Dannay and Lee were starting to send Ellery off into the countryside but personally I think he’s most at home in New York.

The S.S. Van Dine influence is still evident in this tale and Ellery has his Philo Vance-ish moments. Personally that doesn’t bother me. I like Philo Vance, and I like the early incarnation of Ellery Queen. The affectionate antagonism between Ellery and his father, Inspector Richard Queen, adds more fun.

The Chinese Orange Mystery is for my money one of the most completely successful of the early Ellery Queen mysteries. Very highly recommended.