The Key Man (1957) is a fine British crime B-picture with a definite hint of film noir.

You Can’t Escape (1956) is another low-key British suspense thriller B-movie that is well worth a look.

The Mirror Crack'd (1980) is a fun adaptation of the Agatha Christie with Angela Lansbury making a rather good Miss Marple. Plus it has delightfully high camp performances by Elizabeth Taylor, Rock Hudson, Kim Novak and Tony Curtis.

The House of Fear (1945) is one of the lesser Basil Rathbone Sherlock Holmes movies but it has its moments.

Partners in Crime (1961) is a very low budget British Edgar Wallace potboiler. Not a great movie but quite enjoyable.

Guilt Is My Shadow (1950) is an understated but effective little British crime thriller. 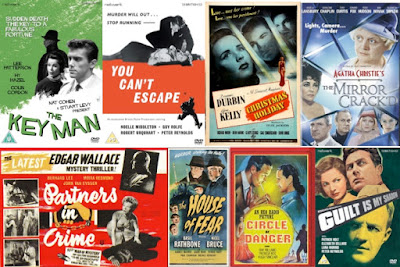