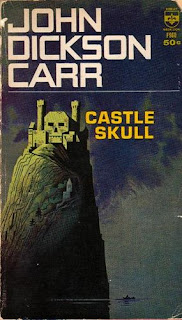 Castle Skull, published in 1931, was the third of John Dickson Carr’s five Henri Bencolin mysteries. Carr connoisseurs generally regard the first four Bencolin novels as apprentice works. That’s true to some extent but they’re still a lot of fun.

Henri Bencolin has been hired by wealthy Belgian industrialist Jérôme d’Aunay to solve a mystery in Germany. The famous but ageing English actor Myron Alison has been murdered and the murder took place in the forbidding Castle Skull on a rocky eminence overlooking the Rhine. As its name suggests Castle Skull is a castle with a façade that looks uncannily like a human skull. The fifteenth century castle had been owned by the famed stage magician Maleger and thereby hangs another tale. Some years earlier Maleger had been killed by a fall from a railway carriage. It had to be suicide since there were trustworthy witnesses who swore no-one had entered his compartment. If Maleger was murdered it was an impossible crime, but no-one believes he would have taken his own life - and certainly not in such a commonplace manner.

Myron Alison lived in a palatial residence on the opposite bank of the river. On the night of his murder a figure was seen emerging from Castle Skill - a figure enveloped in flames! The victim proved to be Alison although oddly enough he had already sustained fatal gunshot wounds before being set on fire.

Bencolin and Jeff Marle (the narrator and Dr Watson of the story) are invited to stay in Alison’s house. Still present were the house guests who were there at the time of Alison’s murder and logically one of them must be the murderer. There’s temperamental violinist Levasseur, d’Aunay and his pretty (and very much younger) wife Isobel, the mostly somewhat drunken and neurotic young English baronet Sir Marshall Dunstan and Sally Reine (who is obviously in love with Dunstan). There’s also Myron Alison’s sister Agatha, known (for no good reason) as the Duchess. The Duchess had been a noted beauty in her youth; now her passions are confined to chess and poker (especially poker).

This time Bencolin has a rival, in the person of a celebrated German detective, the Baron von Arnheim - an old school Prussian aristocrat complete with dueling scars. The Frenchman Bencolin and the German von Arnheim had been much deadlier rivals once, as agents of their respective intelligence service. Their rivalry is fierce although tempered by mutual respect.

One of Carr’s great strengths was his genuine feel for the gothic and he gives it full rein in this story. Castle Skull is as forbidding (and spectacular) inside as it is from the outside, a place that has seen much bloodshed and many crimes over the centuries. The story itself is reeking with gothic atmosphere.

Carr’s mastery of plotting is already in evidence. We may think we know where the story is heading but the author has plenty of surprises up his sleeve.

The suspects are a rather colourful bunch, the competitiveness between Bencolin and von Arnheim adds spice, there are some fine if rather grisly set-pieces, the setting is superb and Carr makes the most of it, there are lots of wonderful gothic tropes as well as detective story tropes and the pacing (this is a very short novel) is pleasingly brisk.

Personally I think the fourth of the Henri Bencolin mysteries, The Waxworks Murder, is even better but Castle Skull is nonetheless splendid entertainment. Highly recommended.
Posted by dfordoom at 8:44 PM