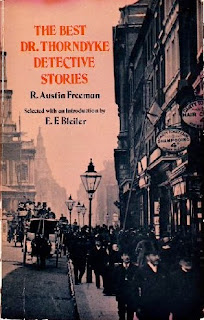 The 1973 Dover paperback collection The Best Dr Thorndyke Detective Stories includes eight stories by one of the most important of all writers of detective fiction, R. Austin Freeman. Freeman’s career began in the early Edwardian period and lasted until the early 1940s. Freeman represents a kind of bridge between the Victorian detective story and the golden age style of the 20s and 30s.

Freeman was also the inventor of the “inverted” detective story in which the identity of the killer is revealed right at the beginning of the story. It was Freeman’s belief that the unravelling of the crime by his sleuth would provide enough interest to sustain such stories even when the reader already knows who did the murder. And by and large Freeman’s judgment proved to be correct.

This collection includes three inverted detective stories, four conventional tales of detection plus an early and much shorter version of one of his most celebrated novels, 31 New Inn.

The Case of Oscar Brodski was one of his first attempts at the inverted detective story. A  burglar who has always been careful to avoid crimes against the person succumbs to temptation when he sees what seems to be a golden opportunity. In A Case of Premeditation a blackmailer is murdered. The killer comes up with an extraordinarily ingenious scheme, but it may not be clever enough to fool Dr Thorndyke. Echo of a Mutiny involves a spur-of-the-moment murder, an attempt to cover up a crime in the past - a mutiny at sea.

One notable feature of these three stories is that interviews with the suspects play no part whatsoever in Dr Thorndyke’s investigations. In fact in two of the stories Dr Thorndyke never meets the suspects at all. These are tales of pure scientific detection. Dr Thorndyke has little interest in alibis or motives and zero interest in psychology. His method relies on an extremely thorough search for physical clues, absolute scientific rigour in the analysis of the physical evidence and his ability to use his considerable powers of reasoning to connect these clues in such a way as to reveal the story they have to tell. It should be stressed that Thorndyke is not a detective as such - he is an expert in medical jurisprudence. His job is to examine the physical evidence and make his report which is then passed on to the police. While he would undoubtedly admit that other methods of investigation are perfectly valid they are not his department - they can be left to the police. His job is a strictly limited one but his methods are so effective that more often than not they are more than sufficient to uncover the identity of the killer.

In these stories Freeman also eschews the use of the kinds of clichés so beloved of the detective story writers of the Victorian and Edwardian eras and indeed of the golden age of the 20s and 30s - Dr Thorndyke is not a master of disguise and while wills may be involved their function is merely to confirm a killer’s motive after Thorndyke has already established his guilt.

Another of Freeman’s innovations was to place murder at the centre of crime fiction. Given Dr Thorndyke’s methods this was inevitable - murder is the one crime that can be guaranteed to provide an abundance of physical evidence.

Investigations of this sort might sound like they have the potential to be rather dry. What makes these stories gripping reading is that Thorndyke’s methods are genuinely and authentically scientific and thoroughly plausible. There is no pseudoscience here. Freeman himself not only had medical training he had also studied under Dr Alfred Swayne Taylor, one of the leading lights in the field of medical jurisprudence. Freeman knew his stuff and he has no difficulty in convincing the reader that Thorndyke’s approach is thoroughly sound scientifically.

Conan Doyle was certainly well aware of the growing importance of science in the detection of crime and Sherlock Holmes is nothing if not enthusiastic about such methods. He is also at times quite brilliant in his use of the fledgling arts of forensic science.   Holmes is however essentially a gifted (and self-taught) amateur. Dr Thorndyke on the other hand is a professional and his approach is far more systematic and disciplined. He carries with him his own “portable laboratory” equipped with the tools of his trade. He represents a major step forward in the sub-genre of the scientific detective story.

The remaining stories in this collection are conventional in structure but they are finely crafted tales of detection. The Mandarin's Pearl has a rather typical Victorian atmosphere - dirty deeds committed on sailing ships, intrigue in exotic locales, mysterious Chinese gentlemen and a valuable pearl with the obligatory curse attached to it. Dr Thorndyke however solves the case in his usual scientific manner. It might be conventional but it’s ingenious and very entertaining.

The Blue Sequin has a solution that is as outrageous as any in the genre but no matter how outlandish it might be it makes perfect sense. It might be unlikely, but the pieces slot together to furnish what has to be admitted to be a not only a logical explanation but the only possible explanation.

The Aluminium Dagger is an early (and rather clever) example of the locked-room mystery. The solution is outlandish but Freeman is able to convince us of its plausibility.

Julian Symons in his justly celebrated survey of crime fiction, Bloody Murder, is dismissive of Freeman’s literary gifts while admitting his originality and the appeal of his realistic approach to scientific realism. Raymond Chandler on the other hand had a very high opinion of Freeman’s work, both for his mastery of plotting (something Chandler always admired) and for his straightforward but effective literary style.

Freeman was a major figure in the development of the detective story and although he wrote some superb detective novels such as The Eye of Osiris and The Mystery of 31 New Inn his short stories are perhaps his best work. Highly recommended.
Posted by dfordoom at 12:25 AM