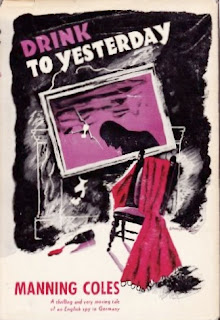 Drink to Yesterday, published in 1940, was the first of Manning Coles’ spy novels featuring Tommy Hambledon. Manning Coles was a pseudonym used by a British writing team, Adelaide Frances Oke Manning (1891–1959) and Cyril Henry Coles (1899–1965). Coles had been a real-life British spy in the First World War (and would serve British Intelligence again in the Second World War) while Manning had worked in the War Office so they had the advantage of knowing the espionage game from the inside. The Tommy Hambledon series eventually ran to 26 novels.

Drink to Yesterday spends a fair amount of time giving us the backstory of young Michael Kingston. It perhaps spends a little too much time on his childhood. When the First World War breaks out Michael is too young to enlist but eventually does so by lying about his age (as Coles himself had done). After a short spell of service in the trenches he is recruited by British military intelligence where he encounters his former schoolmaster and mentor Tommy Hambledon. Hambledon, a man a good few years older, is an experienced spy and it is apparent that he has had his eye on Michael as a potential spy for quite a while. Even before the war Hambledon had encouraged the boy to concentrate on modern languages at school and Michael’s fluency in French and German makes him ideal espionage agent material.

Tommy and Michael, in the guise of disaffected Boers, travel to Germany where Michael strikes up a friendship with a senior German intelligence officer, von Bodenheim. The German agent is, perhaps surprisingly, a rather sympathetic character. He has considerable charm and warmth which he conceals beneath a veneer of cynicism. In fact right from the start Tommy is at pains to point out to Michael that German spies are just like them - brave resourceful men doing their duty as they see it.

Michael becomes a very successful spy who pulls off some spectacular coups but he finds himself becoming somewhat disillusioned. Success can be as bitter as failure. He also learns that when you live a life based on deception you can find yourself with no real identity at all.

For a novel published in 1940 Drink to Yesterday demonstrates a remarkable even-handedness. Young Michael encounters something he didn’t expect - when you live among Germans as a spy you get to know them rather well. You discover that they are capable of heroism, that they are capable of suffering, that they know doubts and fears, they fall in love, they form friendships. They experience all the normal emotions. It becomes difficult to think of them merely as enemies. You get to genuinely like them. And then you have to betray them. You might tell yourself it’s necessary, and perhaps it is, but betraying people is not a pleasant thing to do.

Michael comes to realise that while the Germans have done some barbarous things his own side has committed its share of atrocities as well - the sight of German civilians slowing starving to death as a result of the British blockade horrifies him.

He also discovers that the world of espionage and counter-espionage is a world of suspicion and deception in which decisions have to be made on incomplete information and sometimes those decisions turn out to be wrong. Tragically wrong. The tone of this book reminds me a little of W. Somerset Maugham’s brilliant 1928 Ashenden, or the British Agent. It’s undoubtedly significant that Maugham was also a real-life spy who knew very well how easily such tragic mistakes can be made.

I’m told that the later Tommy Hambledon books become steadily more light-hearted and even whimsical but Drink to Yesterday has a definite edge of grittiness to it, albeit combined with an appreciation of the heroic and glamorous side of espionage. Or at least that’s how it appears at first - as the story progresses we discover that the heroic side to spying isn’t quite so heroic after all and the glamour is largely phony. The tone of the novel grows steadily darker.

In some ways the book reflects the mood of post-war disillusionment rather than wartime patriotism. It has the kind of feel that the new breed of spy thriller writers of the 30s were starting to bring to the genre in novels like Graham Greene’s Stamboul Train and Eric Ambler’s Epitaph for a Spy. Like Greene and Ambler the authors of Drink to Yesterday are as much interested in the psychology of espionage as they are in spy tradecraft.

The structure of the novel is quite interesting - Michael’s story is told in an extended flashback. We know how the story will end, and yet really we don’t know.

While the authors are not in the strictly literary sense in the same class as a Somerset Maugham the somewhat laconic story-telling style grown on you and in its own way it proves to be quite effective.

Drink to Yesterday is an intelligent and surprisingly dark spy thriller with a real sting in its tail. Highly recommended.