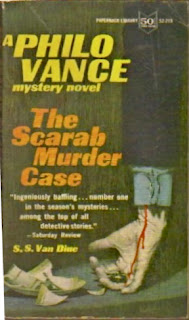 The Scarab Murder Case, published in 1929, was the fifth of S. S. Van Dine’s twelve Philo Vance mysteries. This one has, as the title suggests, an Egyptology background to it. I’m a sucker for anything to do with Egyptology and since I’ve loved the other Philo Vance books I’ve read it was pretty near a dead set certainty that I’d love this one. Which I did.

The very wealthy Benjamin H. Kyle is found murdered with his skull crushed by a statue of the Egyptian goddess Sakhmet. Kyle owned two adjoining brownstones in East Twentieth Street in New York. One of the houses had been converted into a museum of Egyptian antiquities, under the directorship of Dr Mindrum W. C. Bliss. Kyle’s body was found in the museum. The other house, the one next door to the museum, is occupied by Dr Bliss, his half-Egyptian wife, an old family retainer of Mrs Bliss’s named Hani and Kyle’s nephew Salveter. The body was discovered by Donald Scarlett, an Englishman and an amateur Egyptologist who had acted as a technical adviser on most of Dr Bliss’s archaeological digs.

In true golden age detective style we have been introduced to all the possible suspects within the first few pages, and any one of the characters enumerated above could have had both motive and opportunity for killing Mr Kyle. The obvious evidence points to Dr Bliss and both the District Attorney John F.-X. Markham and Sergeant Heath of the Homicide Bureau (characters who appear in virtually all the Philo Vance novels) are inclined to make an early arrest, but Markham’s old friend and frequent colleague, the brilliant amateur detective Philo Vance, has a deep and abiding suspicion of obvious evidence. He persuades Markham and Heath to hold off.

It soon becomes obvious that the evidence is less clear-cut than first appeared and it will take all Philo Vance’s talents to unravel this mystery.

This is classic, almost textbook, golden age detective fiction. The plotting is ingenious and fiendishly convoluted. The characters are colourful enough but in this type of detective fiction characterisation takes a back seat to the working out of the puzzle at the heart of the book. And this one has an undeniably clever puzzle, leading on to a very clever and somewhat surprising conclusion (surprising not in terms of the identity of the murderer so much as the manner in which the said murderer is brought to justice).

Whether you actually enjoy the book or not depends almost entirely on how you feel about Philo Vance. If you find him insufferable, and many people do, you will this book a chore to get through. If, like me, you simply adore Philo Vance then you’ll find the book to be an absolute delight. If you haven’t read any of the Philo Vance mysteries I’d be inclined to recommend that you start with the first of them, The Benson Murder Case, and then work through them in chronological order.
Posted by dfordoom at 8:37 PM