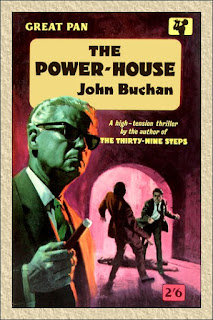 John Buchan’s The Power-House precedes The Thirty-Nine Steps, the first of his Richard Hannay novels, by two years. It was serialised in Blackwood’s Magazine in 1913 and was published in book form in 1916. Like the Hannay novels it is a spy novel, although it is really little more than a novella.

The book features another Buchan hero, the barrister Sir Edward Leithen. What makes it interesting is that Leithen is most definitely not a man of action. He describes himself as a sedentary, settled sort of man and that’s what he is. He has rarely been out of London, and has never ventured further afield than Monte Carlo. In a spy novel you expect exotic locations and this novella provides them, but curiously enough the hero never leaves London apart for a brief foray which takes him no further than Dorset.

The novel does provide us with a fairly memorable diabolical criminal mastermind in the person of Edward Lumley. Lumley is a man in his 60s, a collector of old Wedgewood and a keen bibliophile and scholar. He is an urbane and civilised man but he heads an organisation known as the Power-House, an organisation that threatens the very existence of western civilisation.

Like many of the heroes of early spy fiction Sir Edward Leithen is drawn into the world of espionage by accident and against his will, although he has to admit that he rather enjoys himself. Leithen is a rising barrister and a Member of Parliament. It’s fitting that Buchan should choose a politician as his hero given that Buchan himself had an active career in politics which culminated in his appointment as Governor-General of Canada as the first Baron Tweedsmuir.

Leithen’s pal Tommy Deloraine, also an MP, tells him of the strange behaviour of their old friend Charles Pitt-Heron. Pitt-Heron has suddenly converted a room in his house into a laboratory, has remained closeted in the laboratory performing mysterious experiments, and has then abruptly vanished. Tommy is convinced that there is something fishy going on, that Pitt-Heron has become involved, probably unwittingly (since he is a decent fellow), in something foolhardy and possibly even sinister. Tommy believes Pitt-Heron is in Moscow and sets off to find him.

While Tommy is off in foreign parts Leithen is becoming more and more heavily involved, mostly through a chain of coincidences which seem to keep leading him to an old gentleman named Edward Lumley. Lumley is clearly an educated and cultured man, a connoisseur of the arts, but there is something about him that suggests to Leithen that he may be very dangerous indeed. Lumley’s ideas quite frankly terrify Leithen. Leithen also finds that the trail leads to a sinister international organisation know as the Power-House.

Tommy follows Pitt-Heron’s trail to Bokhara but although he imagines that this is his adventure the crucial events of the story will unfold in London, and it is the sedentary Leithen who will be the hero of the hour.

Interestingly, given that Buchan was a staunch Tory, Leithen’s main ally in the struggle against the Power-House is a patriotic and courageous Labour MP.

This is in many ways typical Edwardian spy fiction, but told with Buchan’s inimitable style and verve. Sir Edward Leithen is an unconventional spy fiction hero, certainly not an action  hero like Richard Hannay, but that’s part of the charm of this short novel. Highly recommended.
Posted by dfordoom at 10:46 PM