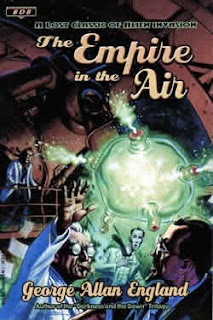 George Allan England’s Empire in the Air was serialised in All-Story Cavalier Weekly in 1914. Although he was a successful writer at the time the story has since been all but forgotten, until its publication by Black Dog Books in 2006.

A pioneer aviator named Kramer is attempting to set a new world altitude record when he suddenly disappears. Completely. No wreckage, no explosion, just one minute he’s there and the next he and his plane have vanished. Almost as if they’d been sucked into the Fourth Dimension.

Which is of course exactly what happened!

Scientists at the Observatory in Boston were tracking the flight on an array of high-tech (by 1914 standards) instruments but they are mystified by the vanishing aircraft and aviator.

His girlfriend Ethel immediately swoons and falls into a coma.

Then something even more uncanny happens. A strange greenish transparent globule appears in the Observatory and leaves a mysterious message purporting to be from Kramer. One of the scientists at the Observatory, a man named Keane, also receives a visit from the globule, and another message - in Kramer’s own handwriting!

Further messages are received through the unconscious Ethel who speaks in Kramer’s voice. Kramer’s message is a frightening one. The earth is on the brink of invasion from the Fourth Dimension! But there is hope, if Kramer’s instructions are followed.

The first stage in the invasion comes soon afterwards. Millions of globules spread death and destruction across the entire globe. Boston is devastated, but Keane survives and makes contact with Ethel’s doctor, Dr Rounds. Between them they determine to carry out Kramer’s instructions - it is the only hope for humanity’s survival.

A team of flyers will need to ascend to 20,000 feet where they will be transmuted to the Fourth Dimension. There they will make contact with Kramer and do battle with the invaders. Keane and Dr Rounds find another ally in Hildreth, an Army Aviation lieutenant and a friend of Kramer’s. The future of the world rests on their shoulders, and on the shoulders of the handful of men they manage to collect from the Watertown Arsenal.

While the ideas in this tale are fairly outrageous the energy and urgency of the story-telling are enough to allow for the necessary suspension of disbelief. There’s plenty of excitement  and heroism, and Kramer is battling to save not just the world, but the woman he loves.

George Allan England (1877-1936) was a lifelong socialist, something that was apparently very obvious in a none-too-subtle way in some of his other science fiction writings, but curiously enough this book seems to say more about the virtues of good old American rugged individualism than the joys of collectivism although he also manages to suggest a somewhat chilling belief in the necessity of dictatorship in a crisis. This was of course (and still is) a common failing of intellectuals when responding to crises.

Luckily though politics doesn’t intrude very much on what is basically a fun pulpy story. Recommended.
Posted by dfordoom at 3:46 PM