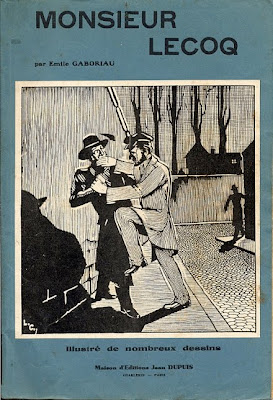 Émile Gaboriau was one of the pioneers of detective fiction. In the late 1860s and early 1870s, before his untimely death, he wrote a string of immensely popular mysteries. Monsieur Lecoq, published in 1868, is one of the best known.

Lecoq is one of several detectives created by Gaboriau. Lecoq is an ambitious young police detective who sees a triple murder in a notorious bar in a Paris slum as an opportunity to achieve the fame that he craves. He feels sure that the man accused of the murder is not what he seems – although he’s apparently an itinerant circus employee Lecoq suspects he may a man of position and breeding.

One of the interesting features of this novel is that Lecoq, although he displays signs of the genius we expect in fictional detectives, is young and inexperienced and makes many mistakes. Gaboriau describes the French system of criminal investigation, so different from the English and American systems we’re accustomed to in crime fiction, in considerable and fascinating detail.

The novel itself is just a little clunky in places but overall it’s rather entertaining and with a flavour all its own. Lecoq himself is an interesting and vividly drawn character.

Gaboriau’s books are mentioned in Conan Doyle’s Sherlock Homes stories and Doyle was certainly familiar with them. They achieved great popularity in the United States in the 19th century and influenced the evolution of the crime novel in the US, Britain and France.
Posted by dfordoom at 9:43 AM