The Devil Rides Out, by Dennis Wheatley 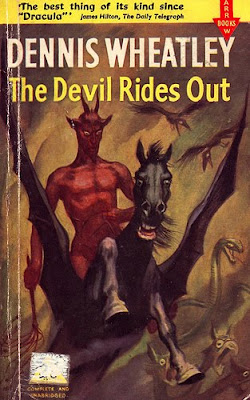 Dennis Wheatley is one of those authors who has gone from topping bestseller lists to complete oblivion in the space of less than 30 years. As recently as the 1970s he was one of the most widely read authors in the world, with total sales exceeding 50 million copies. Perhaps surprisingly The Devil Rides Out, originally published in 1934, is the first of his novels that I’ve read.

I was of course aware of his reputation for jingoism, racism, sexism and insanely reactionary political views, and for his unswerving belief that Satanism is a major force in the modern world and that we should have nothing to do with it because it’s really wicked and terribly naughty. He even includes an amusing little warning at the beginning of each of his books, which essentially amounts to “don’t try this at home boys and girls.”

In fact his approach to magic and religion is rather more complex than you might expect from his Colonel Blimp-ish image. He dismisses any idea of the literal existence of Satan or of Hell as simplistic nonsense, and his heroes use Catholic, Jewish, Buddhist and even pagan rituals in their battles with the forces of darkness. He certainly does believe in the forces of darkness though.

When the Duke de Richlieu’s young Jewish friend Simon Aron becomes involved with evil devil-worshippers the duke and his two-fisted Texan friend Rex van Ryn find themselves caught up in a desperate struggle not only to save young Simon but to save the world from an appalling cataclysm. The Satanist Mocata is trying to locate the Talisman of Set, which will not only give him vast powers but also unloose the Four Horsemen of the Apocalypse (which is how Rasputin started the First Word War of course). Rex meanwhile has fallen in love with Tanith; she’s a devil-worshipper, but she’s not really a bad person and eventually she comes to realise the great peril in which she is putting her soul.

It’s all great fun, Wheatley keeps the action moving along, and there’s lots of fascinating stuff about the Left Hand Path and alchemy and Egyptian mythology. It’s actually highly entertaining, and I’m starting to suspect that Wheatley is an undeservedly forgotten author. And his books are readily available at absurdly cheap prices in second-hand bookstores. I also picked up a copy of another of his books, The Haunting of Toby Jugg, which I’m now quite looking forward to.
Posted by dfordoom at 11:50 PM