Sax Rohmer’s The Sins of Sumuru 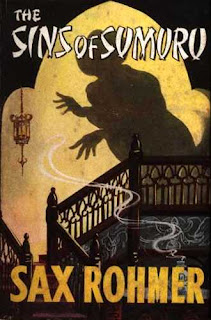 Rohmer’s work is interesting for what it tells us about the fears of its time (and perhaps about the prejudices of our own age). The Fu Manchu stories explore the anxiety that empire brings with it, the ever-present fear that empires on which the sun never sets may not be eternal after all, and that the culture that is dominant today may not be dominant tomorrow. Rohmer was not a mere racist. Fu Manchu was a frightening antagonist because he was educated, brilliant, imaginative and possessed a code of honour. These stories expressed not so much a fear of an inferior culture as the fear of a culture that might turn out to be superior.

The Sumuru tales deal with anxiety about women. The so-called New Woman of the 1890s caused a great deal of worry. The role of women was clearly changing, but it was not clear where that change was going to lead. And again Rohmer does not paint women as inferior and irrational, but like Fu Manchu he portrays them as representing a differing world-view that might well win out in the end. And Sumuru, like Fu Manchu, is both ruthless and brilliant. There is certainly admiration mixed in with the paranoia. Sumuru is threatening because she is more intelligent than her enemies, and because she has a vision.She knows exactly what it is that she wants to achieve.

Sumuru’s machinations go beyond mere crime. She intends to create a New World Order, based on the elimination of war, greed and ugliness. This will be a world order dominated by women. Beautiful women. There will be a place for men, but their role will be strictly subordinate.

A conspiracy to abolish war and greed is obviously an appalling threat to civilisation, so clearly she must be stopped. It’s up to American journalist Mark Donovan and Dr Steel Maitland, one-time naval surgeon and now a senior operative of the British government’s most secret intelligence service, to prevent this woman from destroying the very foundations of our civilisation. Donovan must also save the woman he loves from the clutches of Sumuru. She has been recruited as part of Sumuru’s secret army.

Sumuru, part from being a criminal genius, is also a master (well, mistress) of disguise. In fact no-one knows what she really looks like, so she could be anyone! It’s all terribly and breathlessly exciting! With lots of exclamation points! It was originally published under the even more gloriously pulpy title of Nude in Mink. Silly fun, but definitely great fun.
Posted by dfordoom at 4:27 AM