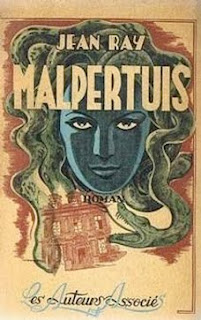 Jean Ray’s 1943 novel Malpertuis is a strange little book indeed. It’s not immediately obvious wherein lies the strangeness, but don’t despair. If you like weirdness, there’s plenty of that to come.

The works of the Belgian-born Ray are generally regarded as belonging to what Europeans call the literature of the fantastique. It’s a rather broad but useful category. Malpertuis certainly has elements of the gothic, of the surreal, of the decadent, and of what Americans were starting to call weird fiction.

I won’t give away very much at all of the plot, because Ray reveals it very slowly and it’s important not to know too early what is really going on.

The novel purports to be a series of manuscripts written at different times by various hands, but all relating in some way to a man named Cassave and a house called Malpertuis. The prologue involves a sea voyage, but what is it that these mariners ate seeking? It’s certainly something from the past. Perhaps it is the past itself. They encounter a fellow mariner who does not seem to belong to their own time. Does he exist in the past, or on another timeline?

We then move on to the main narrative, written by the unfortunate Jean-Jacques Grandsire. The patriarch of the house of Malpertuis, Uncle Cassave is dying. His will is both generous and restrictive. The assorted relatives, hangers-on, servants and old acquaintances are all liberally provided for, but they can never leave Malpertuis.

They seem an odd lot, but young Jean-Jacques soon realises they are much than just odd. And the house is more than just a mysterious old house. Events occur that are so bizarre that Jean-Jacques doubts his own sanity. Even worse, he is uncertain if he can trust any of the other inmates of the house. Not even the beautiful enigmatic Euryale. Perhaps Euryale least of all, but he cannot help but feel the extraordinary fascination she exerts.

Jean-Jacques’ narrative breaks off, and additional information is furnished by the Abbe Doucedame, whose ancestor was partly responsible for setting the original events in motion, and by an elderly monk whose monastery may hold some of the secrets needed to reveal the truth. Are the inhabitants of Malpertuis demons? Madmen? Phantoms of the mind? In fact they are none of these things but neither are they quite human.

Jean Ray was a prolific author who moved easily between the worlds of pulp fiction and more serious literature. He was also responsible for many of the Harry Dickson tales.

Malpertuis was filmed by Harry Kümel in 1971 and the movie is well worth seeing, if only for the extraordinary powerhouse performance by Susan Hampshire in multiple roles (anyone who can act Orson Welles off the screen deserves respect).

Ray’s novel is strange, hypnotic and rather wonderful. I recommend it highly.
Posted by dfordoom at 10:15 PM