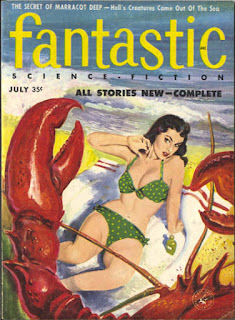 Henry Slesar’s novella The Secret of Marracott Deep was originally published in the July 1957 issue of the science fiction pulp magazine Fantastic. It’s been recently reprinted by Armchair Fiction in their series of pulp science fiction double novel paperback, paired with  Mark Clifton’s Pawn of the Black Fleet.

Henry Slesar (1927-2002) was an American writer who wrote science fiction, detective stories and thrillers as well as having a very successful career as a television writer.

As The Secret of Marracott Deep opens Burt Holrood and his new bride Jessie have just arrived in Hawaii where they are to spend their honeymoon. But Jessie is behaving oddly. Why would a new bride tell her husband that she’d like to spend some time alone? Burt takes refuge in the bar where he meets British oceanographer Dr Percival Nichols. They are having a quiet drink when they hear screams. It is Jessie! Burt rushes down to the beach to find his wife being menaced by - a gigantic lobster! Not just a particularly big lobster but one bigger than a man.

The lobster is after Jessie again on the following day. Burt figures it must be a mutation caused by atomic testing but don’t worry, the real answer is not so obvious or so boring. Dr Nichols is not convinced but he knows there are all kinds of strange things at the bottom of the ocean in places like the Marracott Deep.

A clue is provided by a Hawaiian reporter. Perhaps it’s no coincidence that the lobster seems to be targeting young Mrs Holrood. But what possible connection can a nice young woman from Los Angeles have with oversized crustaceans?

Dr Nichols, being an oceanographer, is a scuba diver. He suggests Burt might like to learn scuba diving. Since he’s spending his honeymoon with a wife who wants to be alone Burt has more free time on his hands than he would have wished for so he agrees. He gets a little over-confident and dives deeper than he’d intended to and he finds something even more startling than giant lobsters. Something that may threaten Civilisation As We Know It.

Burt wants to save civilisation but he’s even more determined to save his wife and she’s certainly in great danger although I’m not going to reveal why that is.

This is a pulp story so there’s no point in getting too worried about details like scientific plausibility. If you accept the story for what it is then it’s quite a bit of fun and there’s  plenty of action. There are other sea monsters besides giant lobsters and there’s something much more threatening than mere sea monsters at the bottom of it.

Slesar’s prose is serviceable enough and he knows how to maintain the right kind of pulpy breathless excitement.

I’m not going to claim that The Secret of Marracott Deep is a great story but it does belong to an interesting sub-genre that I find rather appealing - the unknown terror from the deep science fiction story. It’s a sub-genre that includes John Wyndham’s excellent The Kraken Wakes and Sir Arthur Conan Doyle’s often overlooked 1923 classic The Maracot Deep (which presumably inspired the title of Slesar’s story). Both these books clearly influenced Slesar’s novella but it’s not by any means a mere recycling of exactly the same ideas.

The ending is a bit rushed but I think it works and it has the right impact.

The Secret of Marracott Deep has mysteries in the deepest depths of the ocean, some intrigue involving infiltration of key scientific organisations and it has a beautiful Woman in Peril. It’s fun in its own way. Worth a look.
Posted by dfordoom at 11:51 AM