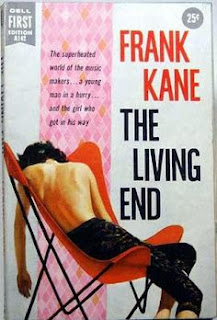 Frank Kane (1912-68) was a successful American hardboiled crime writer who has now fallen somewhat into obscurity. He was successful writer for radio and wrote a lot of scripts for the excellent 1958-59 Mickey Spillane’s Mike Hammer TV series. He also wrote about forty crime novels most of which featured PI Johnny Liddell. The Living End (in which Johnny Liddell does not appear) was published in 1957.

Eddie Marlon is a skinny Polish-American kid who desperately wants to be a song writer. He’s written a song which he figures will be a surefire hit if only someone will get behind it. He has no talent. The song is just a pastiche of half a dozen current hits. But a lack of talent never stopped anybody from being a success in the music business. He tries to get a music publisher named Devine interested, to no avail. Devine does however offer to get a job as an assistant to popular radio DJ Marty Allen. Eddie’s job will be to pick the records that get paid. Devine warns him that Marty Allen is a straight up and down guy - he’s one of the few DJs who doesn’t accept payola.

Eddie honesty is roughly on par with his talent but he’s prepared to go along with Allen’s rules. Then he gets introduced to sultry up-and-coming singer Jo Leary. Jo and her record company’s contact man Mike Shannon are desperate to get her platter on the radio. Jo tells Eddie that there’s no question of paying money to get her record played but that if somebody could get it some air time she could find other ways to express her gratitude. Mike assures Eddie that Jo can be a remarkably grateful girl. And Jo is a sexy platinum blonde with curves in all the right places.

Getting a few air plays for Jo’s song is just minor league stuff. There is real money to be made if you're a guy with flexible ethical standards, or even better no ethics at all. It’s a certainty that Eddie is going to be tempted again.

Temptation comes in an unexpected form. It has to do with a girl (the platinum blonde mentioned above) and a whip. The whip has been used on the girl. Used a bit too enthusiastically. It was a sex game that got out of hand. It wasn’t Eddie who used the whip but it gives him the opportunity to begin his rise to being a big shot in the music industry.

This book is not at all what you might be expecting from a ’50s hardboiled crime novel. There is crime, there is racketeering, but this is strictly white-collar crime. No-one gets taken for a ride by the boys. There are no guns. It’s essentially an exposé of the notorious payola racket, with DJs paid to promote songs. This novel was published in 1957 and the payola scandal broke in a big way two years later. Of course the music business promised to clean up its act, and of course they never did.

The Living End provides a fascinating insight into the almost unbelievably corrupt world of the American music business in the 1950s, and into the extraordinarily ingenious methods by which so many people in a sleazy business were making easy money by manipulating hits.

As a hardboiled crime novel, well this simply isn’t a hardboiled crime novel as such. It’s still quite intriguing, it has a memorable and extremely nasty villain and an overwhelming  atmosphere of corruption and nastiness. It has the tone of a hardboiled crime story but don’t expect any action or any violence. There’s not much sex either although sordid sexual shenanigans are hinted at obliquely (such as payola in the form of sexual favours). Apart from the matter of the girl and the whip the book doesn’t really get into overt sleaze.

This is a bit of an oddball novel but it’s not without interest. It’s an interesting journey into the moral squalor of white-collar crime. Worth a look.

The Living End has been recently reprinted by Black Gat Books.
Posted by dfordoom at 11:42 PM