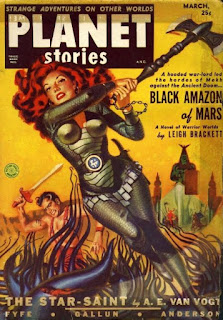 Leigh Brackett’s short story (actually more of a novella) Black Amazon of Mars was published in Planet Stories in March 1951. In 1964 it was expanded and revised as a novel, People of the Talisman. It has been suggested that the expansion may have been largely the work of Brackett’s husband Edmond Hamilton.

The core of the story is the same but it is treated slightly differently. The novel appears, until very late in the story, to be essentially an adventure tale with only the barest hint of science fiction. In Black Amazon of Mars the science fiction elements are there from the beginning, and we have much more of an inkling of what is to come. Eric John Stark does not know exactly what lies behind the Gates of Death but he has a pretty fair idea that it something that should not be awakened. We are given more information early on and there is a much stronger sense of foreboding.

Stark has gained possession of the famous talisman of Kushat, stolen some time before. The talisman is the guarantee of the safety of the city of Kushat. It is the key to a great power that lies beyond the forbidding pass known as the Gates of Death. Only the talisman can save Kushat from the barbarian hordes of the Lord Ciaran.

Stark has no reason to link his destiny to that of Kushat, except for a promise made to a dying man. And there is also the woman, a woman with red-gold hair. She is a dangerous enemy. She might be more dangerous as a lover. But their destinies are entwined. Stark is half-barbarian himself and he knows that whether she brings love or death destiny cannot be denied. There’s a subtle hint of eroticism here that is lacking in the novel. Stark fears the woman but he wants her.

It does seem quite likely that Hamilton had a hand in the revision. The original version seems a bit more Leigh Brackett-like, a bit moodier and with a lot lot more emphasis on the strange attraction between Stark and the woman with the red-gold hair.

The novel People of the Talisman (which I reviewed here recently) has much to recommend it but on balance Brackett’s original story is I think superior. Black Amazon of Mars is very highly recommended.
Posted by dfordoom at 4:17 AM