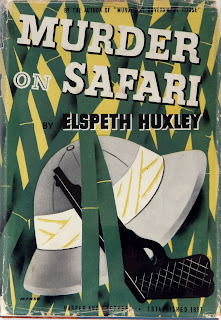 Elspeth Huxley (1907-1997) was an English writer best known for her non-fiction books about her childhood in Africa. She also wrote a handful of murder mysteries the second of which, Murder on Safari, appeared in 1938.

The setting is, obviously, Africa. In fact it is certainly Kenya. This was the twilight of the British Empire although the British hadn't quite realised that yet. Danny de Mare is a white hunter (which is used throughout the book as his job description) and he’s currently leading a safari. The safari comprises the very wealthy Lady Baradale, her husband Lord Baradale, his daughter Cara and her fiancé Sir Gordon Catchpole. The other Europeans in the party are Rutley, Lady Baradale’s chauffeur/mechanic, Cara’s maid Paula, a second white hunter named Luke Engelbrecht and Mrs Chris Davis, a pilot who cuts as a spotter for the safari.

De Mare has informed Superintendent Vachell of the Chania Police that some very valuable jewels of Lady Baradale’s have been stolen from a safe in her tent. Since Luke Engelbrecht has now been fired de Mare suggests that Vachell could join the safari undercover, posing as a white hunter. Vachell adopts the suggestion.

Unfortunately Vachell’s masquerade isn’t very successful and in any case he has to reveal his identity when the first murder occurs. This first murder is ingenious and the second is fiendishly clever.

It’s fun seeing what is basically a country house murder translated to Africa. The camp is a hundred miles from the nearest town. The roads are bad and quite impossible when it rains (which it does frequently) so the camp is effectively isolated. This means that the killer must be one of the nine Europeans with the safari. There are no less than thirty-six African cooks, gun-bearers, porters, etc but Huxley knows her rules of detective fiction. It is simply accepted by everyone that the murderer cannot be one of the African servants.

The African setting is used very cleverly. Apart from the usual hazards facing a detective Vachell survives being trampled by a wounded buffalo, which turns out to be attempted murder (although obviously the buffalo is the weapon rather than the murderer). Instead of cigar ash and footprints in the shrubbery the clues are things like elephant droppings (which it turns out can provide a great deal of information). And instead of alibis being provided by cab drivers or waiters they are provided by things like herds of buffalo (which we discover really can provide an alibi).

The question of a motive for the murders is complicated by the fact that the participants in the safari are also indulging in an age-old indoor sport, jumping in and out of bed with each other with a fine disregard for the conventions of matrimony.

One interesting feature of this novel is that the Africans do not speak in an exaggerated pidgin English manner. They speak pretty much the way you’d expect people who had been educated in a mission school to speak - in reasonably correct English. Huxley does not give the impression of having any doubts about the morality of Britain’s imperial mission but she was brought up in Kenya so she was presumably quite familiar with the way Africans in Kenya spoke. The Africans do suspect that the murders may be connected with witchcraft, and in 1938 that was probably a fairly universal belief. If you’re the sort of person who anguishes over the lack of political correctness in 1930 novels you’ll be rather perplexed by this book - it’s really neither politically correct nor politically incorrect. Huxley just describes the Africa she knew without offering any judgements at all.

A golden age detective novel must of course stand or fall on its plotting, and most crucially on whether it delivers a satisfactory solution. There’s also the matter of fair play. To convince us that she is plying fair Huxley provides copious footnotes in the closing stages linking us to the important clues. And the clues are often extremely clever. There are however two flies in the ointment for me. Firstly, there’s an incredibly vital clue which I feel is fudged. At the end she pulls a rabbit out of a hat to explain it away. And it really is the most vital clue of all. Secondly, she utilises a certain plot device which I personally feel does not actually break the rules but is contrary to the spirit of the game. So I’m not persuaded that this story is absolutely one hundred percent fair play. But it has to be said that many readers are not bothered by this not uncommon device.

And to compensate for these minor flaws there are the very very clever murder methods. The best thing about them is that they’re not just clever - they could only work in Africa. Many of the clues could also only work in Africa. I always admire writers who don’t just use exotic settings to add colour but make the setting vital to the plot.

Murder on Safari is also an exceptionally entertaining read. Recommended.
Posted by dfordoom at 11:32 AM