Graham Greene’s Our Man in Havana 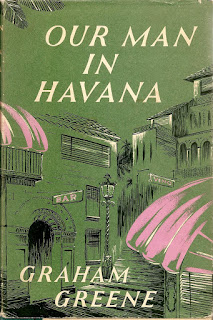 Graham Greene’s Our Man in Havana was published in 1958, providing another example of Greene’s ability to set his stories in places that were just about to hit the headlines (in 1959 Castro came to power).

Our Man in Havana is a spy story. It is the cynical, humorous and absurd tale of Jim Wormold, not exactly one of the shining lights of the British Secret Intelligence Service. Mr Wormold lives in Havana. He sells vacuum cleaners. He is moderately successful but unfortunately he has a daughter. That’s not unfortunate in itself but the daughter, Milly, is at the age at which daughters become very very expensive. Even worse, Milly has now conceived a passion for horses. She must have one. There is simply no way Mr Wormold can afford the upkeep on a horse as well as a daughter.

So it seems like a stroke of good luck when Mr Wormold is approached by Hawthorne. Hawthorne works for MI6 and he’s in the process of setting up an espionage network in Cuba. Hawthorne believe that a vacuum cleaner salesman is the perfect cover for a spy. Mr Wormold knows nothing of the world of espionage and has no interest in politics but the $150 a month plus expenses that Hawthorne offers him interests him quite a bit. So Mr Wormold becomes MI6’s man in Havana.

Initially Wormold is a bit worried by the fact that he nothing about the world of spies and knows nothing about recruiting agents but then he realises that it doesn’t matter. The network of agents he’s supposed to recruit don’t have to actually exist. The information he sends back to London doesn’t have to be real. It just needs to sound convincing. Pretty soon he has a whole network of imaginary agents and he’s sending off detailed reports to London with lots of disturbing information, none of it rel. He’s even sent them drawings of high-tech weaponry at a new top-secret military installation. The fact that these sophisticated weapons look a bit like parts of a vacuum cleaner somehow gets overlooked in all the excitement.

The head of MI6, C, is convinced that Wormold is  the most valuable agent they’ve ever had. The more fanciful his intelligence reports become the more certain C is that they must be true.

Things are going very nicely for Mr Wormold. Until somebody starts trying to kill his agents. Which is very disturbing since those agents don’t actually exist. Fiction is becoming reality.

Greene had converted to Catholicism in 1926. After the Second World War, and probably not coincidentally after his stint with MI6, Greene’s politics became steadily more leftist although it’s important to keep in mind that he was an old school leftist with nothing in common with the leftism of today. And while his Catholicisjm seems to recede into the background a little it’s also important to remember that he saw no conflict whatsoever between left-wing politics and Catholicism.

When he wrote this novel Greene seems to have been going through one of his upbeat phases (he was prone to frequent bouts of extreme depression). Wormold is more sympathetic than most Greene protagonists (you can’t really call any of Greene’s protagonists heroes). He’s a timid little man but he’s not a hopeless alcoholic and he hasn’t given in to despair or nihilism. He knows little about raising children but he’s managed to be a reasonably good father. He’s a nice guy. He isn’t very honest but he has no wish to do any harm to anybody. He thinks the espionage stuff is all very silly but if MI6 are foolish enough to pay him money he’ll take it. Even when he gets himself into deep trouble he doesn’t give in to despair. Whether he can extricate himself from the mess might be extremely doubtful but at least he’s going to try.

Despite the fact that Wormold never does any actual spying Our Man in Havana manages to be an enjoyable and exciting spy thriller. It’s also superb satire, and very funny. Greene’s contempt for spies is palpable and as in The Quiet American there’s an awareness of how much harm can be done by bungling intelligence agencies but it’s combined with genuine amusement.