Max Murray’s The Voice of the Corpse 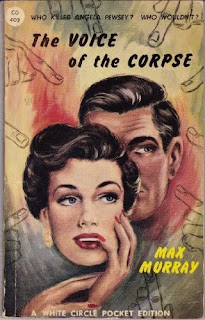 The Voice of the Corpse was published in 1948. It was Australian author Max Murray’s first detective novel.

On the surface this seems like an utterly conventional mystery, with its village setting and with the murder victim being a writer of poison-pen letters. Even by the standards of writer of poison-pen letters Angela Pewsey is a nasty piece of work. She likes to twist the knife as much as possible. Of course poison-pen letters are not really effective unless they contain a good deal of truth, which then puts the victims in a particularly unpleasant position - if they go to the police their dirty little secrets will be revealed to all the world.

After a while just writing the letters is not enough. Angela wants to torture her victims face-to-face. Of course when you thereby reveal yourself to your victims there’s an excellent chance one of them will decide to hit you over the head with a blunt object. Which is what happens to Angela Pewsey.

The local police have no doubt as to the explanation for the crime - it must have been committed by a stranger. Probably a tramp. It’s unthinkable that any of the villagers could have done the deed but tramps are always lurking about killing people. It must certainly have been a tramp. Not surprisingly the Chief Constable soon decides to take the matter out of the hands of the local police. He calls in Scotland Yard, and they duly despatch Inspector Tom Fowler to the scene.

But there is already a detective on the scene. Well, not actually a detective. Firth Prentice is the Sims family solicitor, Mrs Sims having requested his presence to offer advice on how to handle the poison-pen problem (her daughter Celia having received one of these letters).

So you might expect that this would be a typical story in which an amateur detective competes with the official police to find the solution and makes the police look like fools. But it’s not quite like that. Firth Prentice has no desire whatsoever to act the part of detective. When vital evidence in the form of a page from Angela Pewsey’s diary is dropped into his lap he is horrified, and he is relieved when the unbelievably stupid local police refuse to even look at the document. And nobody in the village (which by the way is called Inching Round) has any desire to see the crime solved. Firth takes no active steps until the very end when his hand is forced by the need to protect certain people and by his realisation that the official investigation might be going hopelessly astray.

The ending is clever, if morally very questionable.

The style is witty and rather tongue-in-cheek and the book is at times very amusing. In fact the style is the book’s strongest point.

Firth Prentice is a fascinating protagonist. He’s not just lazy and uninterested, he’s also remarkably irritable. His irritability stems partly from his horror at finding himself in the country, surrounded by people who bewilder and appal him.

It might sound like a traditional puzzle-plot mystery but it isn’t really. Alibis and physical evidence play no part whatever in the story. The plot is almost entirely motive-driven. Both the official police and Firth Prentice act on the (very dubious) assumption that once the motives are uncovered the whole mystery will be automatically solved. Unfortunately, for a story that relies so exclusively on motive, the motive that provides the key that finally unlocks the mystery is very unconvincing.

There’s also not a great amount of actual detecting. Two small boys from the village actually do more detecting than all the detectives, official and unofficial, combined. I don’t think I’d describe this as a fair-play mystery. The book’s total lack of interest in alibis, times of death or any kind of physical or forensic evidence means that there are very few clues. Everything comes down to motive, which means that everything comes down to psychology. The only significant physical clues are not revealed until almost the end of the book and they are simply drawn out of a hat. This is not really a detective story. It’s not quite a psychological crime novel either. Motivations are important but the book (mercifully) has no interest in the inner workings of any of the characters’ minds.

The Voice of the Corpse is quite entertaining but by 1948 crime fiction was already starting to take a seriously wrong turn, with intelligent plotting becoming less and less fashionable. Despite a good twist at the end the plotting in this book just doesn’t have the satisfyingly intricate quality that you find in works of the 20s and 30s. The golden age of crime fiction was drawing to a close. The Voice of the Corpse is maybe worth a look if you pick up a copy cheaply enough.
Posted by dfordoom at 8:17 PM