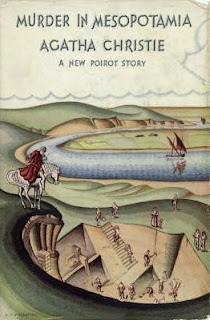 Murder in Mesopotamia, one of Agatha Christie’s more celebrated mysteries, was published in 1936. As I did with Evil Under the Sun last year I’m going to review the novel and then add a brief review of the 2002 television adaptation.

Christie, being married to archaeologist Sir Max Mallowan, had a rough working knowledge of the subject and had accompanied him on a number of digs. Using an archaeological dig as a setting for a murder was very obviously a splendid idea. Christie was particularly good with exotic locales - she never allows them to overshadow the plot or to slow things down but she uses them very effectively for atmosphere.

In this case the action takes place in the expedition house, a large building with a central courtyard. Very conveniently (for Christie’s purposes) there is only one way of getting in, through a gateway which is always guarded. And there are no windows at all that will allow access from outside. If a killer is going to get in he must come through the gateway and when murder does occur in this novel the gateway is under observation by three servants, all reliable and trustworthy. So we have the classic setup - the killer must have been inside already and therefore must be a member of the expedition. There are therefore only about half a dozen possible suspects.

The dig is in Iraq, not too far from Baghdad. Dr Leidner leads the expedition. He is accompanied by his wife. There is his long-time colleague Carey, there is Mr Mercado and his wife, a French monk whose job it is to translate inscriptions, and three younger men.

Also on the scene but not living in the expedition house are Dr Reilly and his daughter.

There is also the narrator, Nurse Leatheran, is a woman with plenty of sound common sense but very little imagination. She’s also inclined to be a remarkably poor judge of people. If they have good manners and are superficially refined she thinks the best of them. if they seem not quite respectable she thinks the worst of them. That’s undoubtedly why Christie found her to be ideal narrator. She’s not exactly an unreliable narrator but she is (like Captain Hastings) inclined to miss crucially important points. In fact she’s a bit of a fool. Having a narrator who understands little or nothing of what is going on is of course a favoured device of mystery writers, being incredibly useful in encouraging the reader to miss key plot points. Christie always enjoyed using it to add humour as well.

Nurse Leatheran has been employed because Mrs Leidner has vague and unspecified nervous troubles. There is an odd atmosphere of tension among the expedition members. 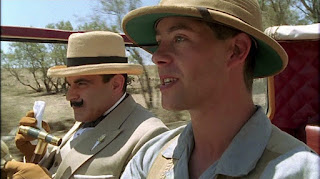 Of course there is a murder. Luckily it just so happens that a certain Belgian detective is in Iraq at that very moment. Poirot is on the scene very quickly. He makes it clear that he believes the mystery can only be solved by understanding the victim’s personality. There seems to be an extraordinary amount of disagreement among the expedition members on this point. The victim may have been universally loved or universally disliked. It all depends on whom you ask.

There’s a lot to admire in this book. There are some very clever, very devious clues. Devious, but fair. There’s some good stuff involving alibis. There’s some wonderful misdirection. My problem with Christie is that most of her books are extremely clever but for me there’s nearly always something that doesn’t quite satisfy me. To be totally successful a detective story has to have a solution that is ingenious but at least vaguely plausible. Not so much technically plausible but psychologically plausible. I have to feel that the characters really might have behaved in the way that the book has them behaving. In Murder in Mesopotamia there is one crucial psychological element that in my view fails the believability test. So for me it’s another Christie that ends up leaving me with a few doubts. She has built an extraordinarily impressive house of cards and then added one final card that risked causing the whole thing to collapse. Overall this is a dazzling piece of work and that final card probably wasn’t even necessary.

Apart from the plotting it’s typical Christie. I’ve never understood how anyone could find Christie dull. Her writing has a delightful sly wit and in this case her use of the incredibly obtuse nurse as narrator is masterful and very amusing.

Murder in Mesopotamia is a brilliant work with perhaps a minor flaw. It’s still recommended.

The TV version omits a few characters but they’re mostly peripheral characters like Dr Reilly (whose daughter now becomes the daughter of Police Superintendent Maitland. A more important change is that Nurse Leatheran is demoted from narrator to being just another member of the party. A pity since her psychological obtuseness was amusing. 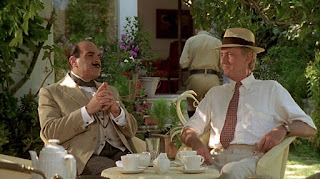 Captain Hastings is introduced into the story, quite unnecessarily but he was popular with viewers and he takes over from Nurse Leatheran as Poirot’s sounding board.

The plot remains basically the same except that writer Clive Exton increases the body count dramatically. There’s no need for this but presumably he felt that a murder was needed right at the start to keep viewers interested.

The biggest weakness is the casting of Barbara Barnes as Louise Leidner. She’s just not glamorous enough to be convincing as a woman who exercises an overwhelming power over men.

Of course it looks fabulous. Even when this series got everything else wrong it looked great.

In this case it gets things mostly right. The minor reservation I have about the novel applies also to the TV version. It’s still pretty decent entertainment.
Posted by dfordoom at 1:48 AM