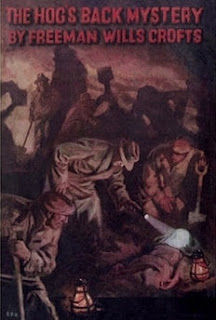 Freeman Wills Crofts is a detective fiction writer people either love or hate. Crofts, at least in the early part of his career, was uncompromising in his devotion to the puzzle plot. His fans find his books enthralling and deeply satisfying while his critics find them dull and uninteresting. If you’re looking for complex characterisation or sparkling wit you’d best look elsewhere. If you’re looking for superb exercises in intricate plotting then you’ve struck gold with Crofts. The Hog’s Back Mystery appeared in 1933 and it’s typical of the Crofts approach to mystery writing.

Julia Earle lives in a isolated house in Surrey with her husband, a doctor now mostly retired from practice. Julia, her sister Marjorie and Ursula Stone had been great friends at school (quite some time ago as the three women are now in early middle age) and Marjorie and Ursula have arrived for what should be a very pleasant visit. It immediately becomes apparent to Marjorie and Ursula that Julia’s marriage is on somewhat shaky ground.

Then Dr Earle suddenly disappears. Very suddenly indeed, and in slightly puzzling circumstances. Puzzling enough to persuade the Surrey police to ask Scotland Yard for help. The help arrives in the form of Inspector Joseph French.

When a man vanishes and there’s no actual evidence of foul play it generally means he wanted to vanish. It also means, more often than not, that a woman is involved (a woman who is not his wife). To Inspector French it seems clear that this is just such a case. This seems to be confirmed when it is revealed that a woman vanished at almost precisely the same time as the doctor, a woman who appears very likely to have been the other Woman in the case. Nonetheless the circumstances were still rather puzzling and both the local superintendent and French agree that the matter needs to be looked into.

There are plenty of clues but there is as yet absolutely no hard evidence whatsoever.

This is the sort of case that illustrates French’s methods particularly well. When you spend an inordinate amount of time following up an extremely promising lead only to find that it leads nowhere and you were on entirely the wrong track there is a temptation to give in to despair. French simply starts all over again from the beginning. It is frustrating but that’s what being a detective is all about. You don’t solve crimes with brilliant leaps of intuition. You solve crimes through doggedness and thoroughness. When you run out of promising leads you start following up the unpromising leads.

French believes very strongly that there is no such thing as a murder that cannot be solved. If there’s a murder there must be a murderer and therefore there must be a solution. You just keep searching for the evidence and you just keep looking for a way to bring the various pieces of evidence together in such a way that all loose ends are dealt with and you must eventually find the solution.

It’s not that French lacks imagination. He has a powerful imagination but it is rigidly disciplined. No matter how attractive a theory of the crime might be if it doesn’t hold together it has to be discarded.

In a Crofts detective novel you expect to find a nice juicy unbreakable alibi. The Hog’s Back Mystery has a whole series of unbreakable alibis. Every suspect (and there are quite a few of them) seems to have an alibi for each of the murders (assuming that they are murders and not voluntary disappearances) and all the alibis seem to be distressingly watertight. To solve the case Inspector French will have to break multiple unbreakable alibis.

This is not a perfect Crofts novel. The solution is fiendishly complex but there’s one absolutely crucial point that relies on a plot device that is always unsatisfactory and unconvincing and there’s another crucial element that makes part of the solution a little too obvious. It also makes use of a favourite Crofts device that he used much too often.

The Hog’s Back Mystery is a good, but not a great, Inspector French mystery. This one has been included in the British Library’s recent paperback reissue series but it’s an odd choice. If you want books that show Crofts at the top of his form check out The Sea Mystery, Inspector French and the Starvel Tragedy, The Loss of the Jane Vosper or Sir John Magill’s Last Journey instead.
Posted by dfordoom at 12:40 AM