John Rhode’s Death on the Board 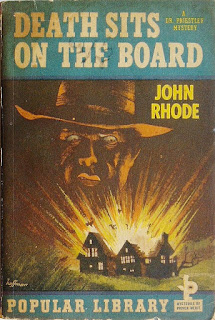 John Rhode’s 1937 Dr Priestley mystery Death on the Board (published in the United States as Death Sits on the Board) opens with a bang. Literally. An enormous explosion tears apart the suburban home of Sir Andrew Wiggenhall, chairman of the prosperous corporation Hardware Ltd, with fatal results for Sir Andrew.

An event such as this would of course normally be put down to the explosion of a gas main. The blast that destroyed Sir Andrew’s home was however much too powerful to be accounted for in this manner. According to an expert from the Home Office only high explosives could have caused such devastation. But he can offer no explanation as to how or why a fairly ordinary house should be destroyed by high explosives.

Superintendent Hanslet is always anxious to have Dr Priestley’s assistance but the problem is that the somewhat eccentric Priestley is unlikely actually to offer his help unless a case really attracts his interest. Everyday crimes, even everyday murders, are beneath Priestley’s notice. The demise of Sir Andrew Wiggenhall does interest him, although at this stage there is still no certainty that foul play was involved. The coroner’s jury brings in a verdict of death by misadventure.

The second murder is even more puzzling, and when once again the inquest ends with a verdict of death by misadventure Dr Priestley is moved to make some rather acerbic remarks on the usefulness on inquests. While there is no evidence of murder the circumstances of this death are very puzzling indeed, and as Priestley observes the lack of evidence pointing to murder may well be merely due to the fact that no proper investigation was made and any such evidence is now irretrievably lost. While Priestley is not yet prepared to become actively involved in the case something the crusty scientist is always reluctant to do) he is now most definitely very interested indeed. The fate of the pyjamas worries him a good deal. And this second sudden death involves a fire that behaved like no fire Dr Priestley had ever head of.

Apart from Priestley’s scepticism on the subject of coroner’s juries this novel also points out some other deficiencies in the system of criminal investigation in England in the 1930s. There is a very extraordinary coincidence that no experienced investigator would have overlooked (and Superintendent Hanslet is both very experienced and very competent) but the coincidence goes unnoticed for the simple reason that only one of these suspicious deaths comes to the attention of Scotland Yard.

There will be more deaths. The only connection between them is that the victims are, or rather were, all directors of Hardware Ltd. While in each individual case there are certainly people who would benefit there seems to be no-one who would stand to benefit from all these deaths. And there is still no certainly that all, or even any, of the deaths were murder.

Major Cecil John Charles Street (1884-1964) wrote an enormous number of Dr Priestley mysteries as well as a considerable number of other mysteries under other names. He was an author with a particular fondness for unusual, even bizarre, murder methods. This book offers several fine examples. While none of the murders could be described as impossible crimes they are all fiendishly ingenious.

There is certainly a solid whodunit plot here but it’s the howdunit aspect that is most impressive and that’s the aspect of mystery writing at which Street really excelled. It’s significant that Dr Priestley is not a detective. He’s not even an amateur detective really. He approaches crime purely from the dispassionate point of view of a scientist. In most of his cases (there are exceptions in some of the novels where he has a personal stake in the matter) he has little real interest in whether the criminal is brought to justice or not. That’s a problem for the police. As a scientist he finds certain aspects of certain crimes to be interesting as scientific problems or logical puzzles. He also has no interest in accumulating the evidence necessary to secure a conviction. That is most definitely a problem for the police. If he can solve a case to his own satisfaction then he is quite content.

In this case his scientific insights are essential in establishing the fact that these deaths really were murder. He is able to prove that neither suicide nor accident could account for them. As for the identity of the killer, that is something that he arrives at by a rigorous logical analysis. The police like to collect evidence but this is an enthusiasm that Dr Priestley most certainly does not share. Such a process seems to him to be tedious and time-consuming and of no interest, plus it is likely to be inconvenient and uncomfortable. Priestley prefers to do his crime-solving in the comfort of his own home.

Street has often been accused of dullness. His style is admittedly very sparse and rather dry but his plots are wonderfully inventive and his murder methods are so baroque that I fail to see how any detective fiction fan could find his books dull. And once Dr Priestley gets into his laboratory things get quite entertaining. In this case one of his experiments, the one that provides the first vital breakthrough, involves dolls in pyjamas.

Death on the Board is Rhode at his best with a whole series of delightfully inventive but entirely plausible murders. Highly recommended.
Posted by dfordoom at 9:48 PM